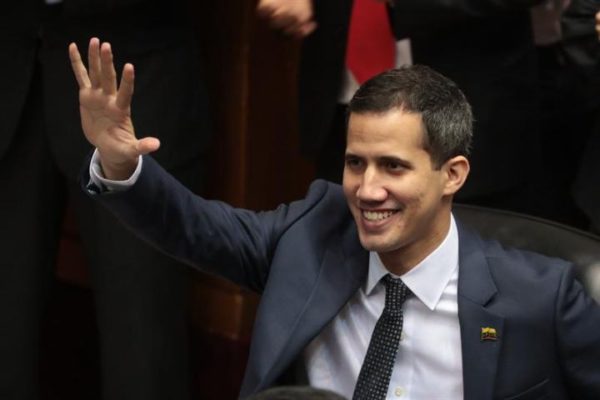 Venezuelan opposition leader Juan Guaido plans to head to the Colombian border in a convoy of vehicles on Thursday to receive humanitarian aid for his crisis-stricken nation, despite the objection of increasingly isolated President Nicolas Maduro.

Guaido, recognized by dozens of countries as Venezuela’s legitimate head of state, said the opposition plans to bring in aid by land and sea on Saturday to alleviate severe and widespread shortages of food and medicine after years of hyperinflation.

He will undertake the 800-kilometer (497-mile) road trip from Caracas in the company of some 80 lawmakers from the opposition-controlled congress, which he leads, opposition legislators said.

Guaido invoked the constitution to assume an interim presidency on Jan. 23.

“Through this call for humanitarian aid, the population will benefit from the arrival of these goods to the Venezuelan border,” said opposition legislator Edgar Zambrano, as he waited in a plaza of eastern Caracas with other lawmakers to board buses.

Maduro’s socialist government denies there is an economic crisis and has said soldiers would remain stationed along the country’s borders to prevent potential incursions.

He accuses the Trump administration, which recognizes Guaido and is supporting the relief effort but has levied crippling sanctions against his government, of seeking to force his ouster.

It is unclear how Guaido plans to bring in the aid. Opposition figures have suggested forming human chains across the Colombian border to pass aid packages from person to person and fleets of boats arriving from the Dutch Caribbean islands.

The United States has sent tons of aid to Colombia’s border with Venezuela, which Maduro has mocked as a “cheap show.” Maduro’s vice president, Delcy Rodriguez, has alleged the aid is poisonous and could lead to cancer.

On Wednesday, Maduro’s socialist administration said it had closed the country’s maritime border with the Dutch Caribbean islands of Aruba, Curacao and Bonaire, after Curacao’s government said it would help store aid destined for Venezuela.

“We know there is interest by the Maduro dictatorship in affecting national security because of coming events,” agency directors Christian Kruger added in the statement.