Were Hungarian authorities really using pigs to deter Muslims at the border? 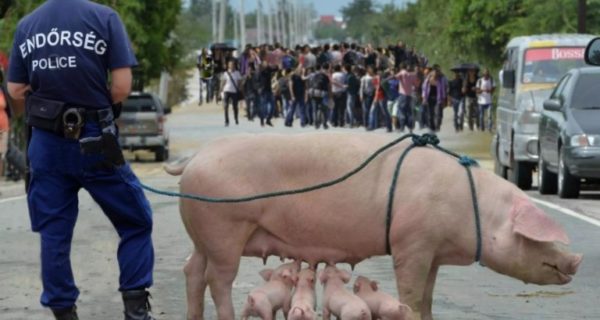 Did the Hungarian police use pigs to deter Muslims at the country’s borders? Apparently so, according to a photo and Facebook post that has been shared thousands of times since late January. However, it turns out the picture was Photoshopped.

In the foreground of this viral photo, there is a police officer with a sow on a leash. She’s surrounded by four piglets. In the background of the photo, you can see a crowd of people gathering. You can read, on the back of the officer’s shirt, letters spelling out “endörség police”. In Hungarian, “rendörség” means “police”– the “r” seems to have been cut out of the frame.

On January 23, an American Facebook account, which shares a lot of pro-Trump posts, shared this photo with the following caption: “Hungarian police use giant Oinker with micro oinkers as backup to fend off attacking Muslims.” The photo and post have been shared more than 24,000 times since.

A photo that’s been circulating since early 2016

It turns out that this isn’t the first time that this photo has circulated online. There are posts as far back as March 2016. It was shared on forums (check out this example or another one here), blogs and websites.

This photo has been shared alongside captions in many languages, including Dutch, English, Czech and Croat.

However, if you do a simple reverse image search, you’ll soon see that this image has been, in fact, Photoshopped.

If you drop this photo into Google Images, you’ll pull up a photo from French news agency Agence France Presse – first published on October 19, 2015 – that shows the same pigs in the same setting (with the road, cars and trees). However, instead of a Hungarian police officer in the foreground, there is a man wearing shorts and a T-shirt. There is no crowd in the distance and instead there are just a few people wading across a flooded road.

The Agence France Presse photo was taken in the Philippines, north of the capital, Manila, the day after typhoonKoppu struck. It’s clear that someone added in the Hungarian police office and the crowd in the background to this photo to create the doctored photo that has been circulating.

The photo has clearly been doctored. However, the question still remains, did the Hungarian police use pigs to deter migrants from its borders?

In August 2016, Gyorgy Schopflin, a Hungarian deputy to the European parliament, posted a tweet suggesting putting pigs heads along the border, which he thought would keep migrants from crossing.

At the time, there was a lot of criticism of his tweet but no concrete steps taken towards implementing his idea.

Our Observer Márk Zoltán Kékesi, a sociologist who used to run an NGO to help migrants (which is no longer active) says that the Hungarian police never used this grisly method.

As far as I know, they never used this technique. They took many scandalous and unjustified actions, but it is unlikely that they did this. A few unknown persons put pieces of pork meat on the fence a few years ago, but that’s it.

Kékesi is talking about the fence built by the Hungarian government starting in summer 2015. Hungarian authorities decided to construct a barrier to keep migrants from crossing the southern border as they thought that the European Union was not doing enough to stem the flow of migrants.

At the time, Prime Minister Viktor Orbán said that he didn’t want Muslim migrants coming to his country. In the past, Hungarian police have already been accused of violence toward migrants.

>> READ ON THE OBSERVERS: Police use Tasers, dogs to attack migrants at Hungarian border