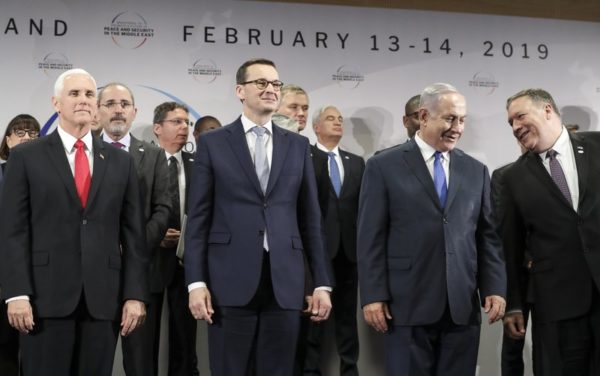 In this Thursday, Feb. 14, 2019 file photo, United States Vice President Mike Pence, Prime Minister of Poland Mateusz Morawiecki, Israeli Prime Minister Benjamin Netanyahu and United State Secretary of State Mike Pompeo, from left, stand on a podium at a conference on Peace and Security in the Middle East in Warsaw, Poland. A two-day security conference in Warsaw was supposed to be a crowning achievement for Israeli Prime Minister Benjamin Netanyahu, stamping a seal on his long-held goal of pushing his behind-the-scenes ties with Arab leaders into the open. Instead, the publicity-seeking Israeli leader made one embarrassing misstep after another, distracting attention from his main mission and sending his aides into a nonstop cycle of damage control. (AP Photo/Michael Sohn, File)
Share:

A Polish government official says Prime Minister Mateusz Morawiecki will not attend a meeting in Israel starting Monday amid new tensions between the two countries over how to remember Polish behavior during the Holocaust.

Michal Dworczyk, who heads Morawiecki’s chancellery, announced the change of plans on Sunday.

Netanyahu made an off-hand comment last week during a Middle East conference in Warsaw that “Poles cooperated with the Nazis” – wording suggesting some Poles during the German occupation of Poland participated in killing Jews.

He was initially quoted by the Jerusalem Post as saying “the Poles,” which could be taken as blaming the entire Polish nation.

Both Netanyahu’s office and the newspaper say he was misquoted in an editing error, but the Polish government said it was not satisfied.