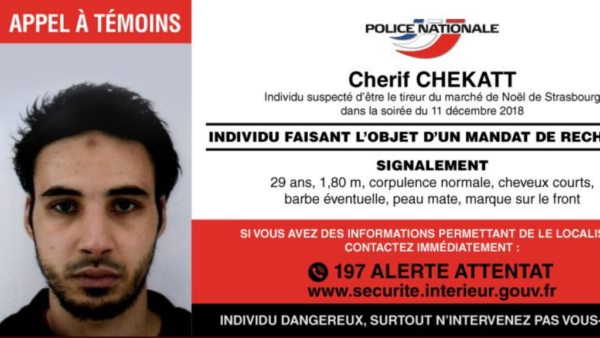 The Strasbourg shooting suspect was convicted multiple times for theft and violence and has been followed by the French intelligence services since 2015 after he showed signs of radicalisation in jail.

The subject of a massive, cross-border manhunt, the 29-year-old suspect in the deadly Strasbourg Christmas market shooting – identified as Chérif Chekatt – is France’s most wanted man today.

Long before he made the headlines for allegedly gunning down two people and wounding 14 others at the historic Christmas market, Chekatt was a known quantity to police and the judicial system, France’s anti-terrorism prosecutor Rémy Heitz said Wednesday.

The suspect has a long history of delinquency: his first encounter with the law was back in 1999 when he was only 10 years old. He has been convicted 27 times for crimes committed mostly in France but also in Germany and Switzerland. The convictions were “mainly for acts of theft and violence,” Heitz said.

Imprisoned in Germany and Switzerland

According to the German press, Chekatt was sentenced in Germany in 2016 to two years and three months in prison for aggravated theft. Expelled in 2017 to Switzerland, he then served a year-and-a-half in a Basel prison for burglary.

Before serving time abroad, the French prison administration had detected in 2015 that he had been radicalised in prison. He was then placed on France’s “fichier S,” — a watchlist designating him as potentially dangerous or potentially involved in terrorism — and began being monitored by French authorities.

French Deputy Interior Minister Laurent Nuñez said Wednesday that this “active monitoring” by the intelligence services was similar to that of many other individuals who were radicalised in prison. He clarified that Chekatt did not try to go to Syria to fight with the Islamic State (IS) group.

“The range of ‘fichier S’ profiles has been greatly expanded in recent years,” said Wassim Nasr, FRANCE 24’s expert on jihadist networks. “Today, there are around 20,000 people on the ‘fichier S’ list in France. Among them, there are some who are very dangerous, but also many who will never act.”

Given Chekatt’s recidivism and the absence, at this stage, of a claim of responsibility by Islamist groups, authorities were initially wary of calling the Strasbourg shooting a terrorist attack. But the Paris prosecutor was explicit on Wednesday: “Terrorism has once again hit our territory,” Heitz told a news conference. “Considering the target, his way of operating, his profile and the testimonies of those who heard him yell ‘Allahu Akbar’, the anti-terrorist police has been called into action.”