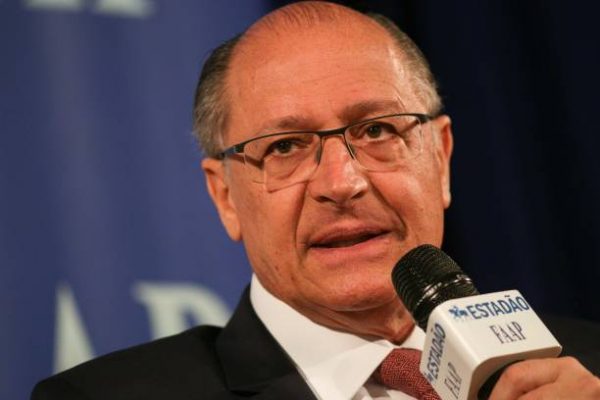 Geraldo Alckmin from the right wing PSDB is running or president in the upcoming election in Brazil. He is vying to replace Michel Temer, the incumbent and another politician of Lebanese heritage
Share:

When Brazilians vote in presidential elections next month they will face a ballot paper that includes candidates with a distinctly Lebanese feel.

Two of the country’s main parties are fielding candidates whose forebears came from Lebanon – Fernando Haddad of the leftist Workers’ Party is running for vice president and Geraldo Alckmin from the right wing PSDB is going for the top job.

Mr Alckmin, seen as a candidate for the business community in a country reeling from a crime epidemic and poverty, may have his work cut out but he is vying to replace Michel Temer, the incumbent and another politician of Lebanese heritage – his parents emigrated from the town of Btaaboura in northern Lebanon in 1925.

Should any of them be successful, they would join a long list of other children of Lebanese emigrants who have made their mark on Latin American politics, joining the recently-elected president of Paraguay, Mario Abdo Beníte and Argentina’s First Lady Juliana Awada.

It is perhaps not a surprise that new generations of Lebanese have made their presence felt on the political stage, given that the large numbers that now reside across the continent. While accurate figures are hard to come by, estimates suggest upwards of 15 million people of Lebanese descent live in the region – around half of them in Brazil.

Since the late 1800s, Latin America has been a refuge for Lebanese fleeing poverty and upheaval. The collapse of the Lebanese silk trade was the spark for the first wave of emigration – around half of the mostly Christian population of Mount Lebanon fled to Brazil in the 50 years before 1914.

Later, violence and instability added to those numbers. A famine during the First World War and Lebanon’s own 1975-1990 civil war saw two big surges.

Many Lebanese began their new lives doing what their ancestors had done so well, becoming tradespeople and peddlers. From there, the community fought its way to an outsized role in the country’s politics. Today, some eight per cent of Brazil’s parliamentarians are of Lebanese descent, despite making up only an estimated four per cent of the population.

“It’s a long tradition that we have of politicians of Lebanese descent,” Thiago Oliveira, head of culture at the Brazilian embassy in Beirut, told The National.

“When the Lebanese went to Brazil they didn’t go to the countryside like the Germans or the Italians, they stayed in the cities where they had access to schools and urban facilities at the time.”

Most of those who made the journey to Brazil “had a culture of trying to have their children well-schooled, which allowed them to go into segments of society like medicine; they became doctors, lawyers, engineers, and they eventually started to reach government too,” Mr Oliveira added.

It was also good timing, according to Dr Elsa Hachem-Kirby, a lecturer at the Lebanese University, in Beirut.

“They joined and contributed to national syndicates, and national industrial institutions, and used these institutions as trampolines to get into politics.”

Such a high number of Lebanese in the political top flight has had a discernible impact on the way Brazil and Latin America as a whole interacts with the Arab world.

“There’s always that sensitivity to the region. Lebanon is seen as a great gate to the Middle East and the Arab markets, through the ports,” Dr Hachem-Kirby added.

“There’s also a lot of political sensitivity to the Middle Eastern conflict, and to Palestine.”

Mexico and Panama are currently the only Latin American states that do not recognise the Palestinian state.

The success of Lebanese diaspora in Latin American politics is not limited to Brazil.

Mexico also counts a number of senators, governors and mayors that trace their roots back to Lebanon. Jose Antonio Meade, a former foreign secretary, came third in presidential elections this year after unsuccessfully running for the Institutional Revolutionary Party.

But some are making headlines for the wrong reasons. Tareck El Aissami, Minister of Industries and National Production in Venezuela’s government, is of Syrian-Lebanese descent. The former vice president has been accused by the US authorities of links to money laundering and drug trafficking.

And Mr Haddad and Mr Alckmin, the candidates in Brazil’s presidential elections, are accused of taking off-the-books campaign donations for their respective campaigns.