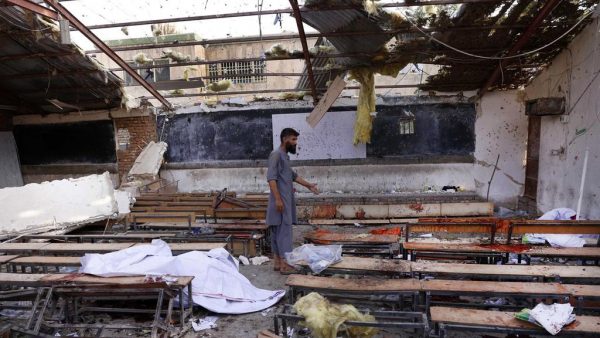 Mawoud education centre . A suicide bombing in front of the centre in a mainly Shiite area in the Afghan capital, Kabul, on Wednesday killed at least 48 people and wounded 67, according to Afghan officials Aug 15, 2018
Share:

A suicide bombing in front of an educational centre in a mainly Shiite area in the Afghan capital, Kabul, on Wednesday killed at least 48 people and wounded 67, according to Afghan officials.

The attacker appeared to target the Mawoud education centre, which specialises in preparing students for university exams, in the predominantly Shiite district of Dasht-e-Barchi in western Kabul.

“We can confirm the attack was caused by a suicide bomber on foot. The bomber detonated himself inside the education centre,” said Kabul police spokesman Hashmat Stanikzai.

The Afghan public health ministry put the death toll at 48 with 67 people wounded.

It was not clear how many students were at the centre at the time of the attack. One witness said as many as 100 students may have been inside when the bomber struck, but officials have not yet confirmed the figure.

Families of students attending classes rushed to the scene of the attack, anxious for news of their loved ones. Relatives also took to Twitter, with posts asking for information about hospitals where the injured might have been taken.

There was no immediate claim of responsibility for the attack, which was swiftly condemned by President Ashraf Ghani in a statement.

Both the Taliban and the Islamic State (IS) group have carried out devastating, high-profile attacks in Kabul in recent months, but the Taliban quickly denied they were involved. Previous attacks on Shiite targets in the area have been claimed by the IS group.

Taliban’s show of force in Ghazni

Afghanistan has been reeling from a recent upsurge in militant violence, including a massive, days-long Taliban onslaught on the strategic eastern city of Ghazni.

Analysts say the assault on Ghazni was a military and psychological victory against the government in Kabul, and was aimed as a show of force ahead of any upcoming peace negotiations between the Taliban and the Afghan government.

At least 100 Afghan security forces were killed in the fight for Ghazni, officials have said, with unconfirmed fears that at least as many civilians died.

Afghan security forces, beset by killings, desertions and low morale, have taken staggering losses since US-led NATO combat forces pulled out at the end of 2014.

But it is ordinary Afghans who have taken the brunt of the violence in the grinding conflict, especially in Kabul, which the United Nations has said is the deadliest place for civilians in the country.

Militant attacks and suicide bombs were the leading causes of civilian deaths in the first half of 2018, a recent UN report showed.

Turf war between Taliban and IS group

The uptick in violence comes as US and Afghan forces intensify ground and air offensives against the IS group, and the Taliban step up their turf war with the jihadist group that has gained in strength since the fall of the Syrian city of Raqqa, the de facto capital of the group’s so-called caliphate.

The IS group has carried out multiple attacks in the eastern city of Jalalabad and the capital in recent months, targeting everything from government ministries to a midwife training centre.

The group has also increasingly targeted the Shiite minority in gruesome sectarian attacks at the sect’s mosques and gatherings.

Earlier this month, the IS group claimed responsibility for twin blasts at a mosque in the eastern city of Gardez that killed at least 35 people.