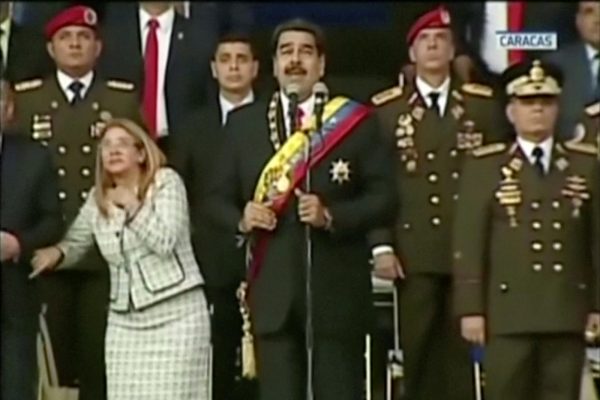 Venezuelan President Nicolas Maduro reacts during an event which was interrupted, in this still frame taken from video August 4, 2018, Caracas, Venezuela. VENEZUELAN GOVERNMENT TV/Handout via REUTERS TV. ATTENTION EDITORS – THIS IMAGE HAS BEEN PROVIDED BY A THIRD PARTY.
Share:

The President of Venezuela has called on Donald Trump to help him fight ‘terrorist groups’ after blaming an apparent assassination attempt using explosives-rigged drones on ‘far-right’ exiles from his poverty-stricken regime living in the US and Colombia.

Nicolas Maduro was addressing a military parade in Caracas on live TV this Saturday when he suddenly halted and looked to the sky after hearing an explosion. A terrified expression crossed his face before he and his wife Cilia Flores were swamped with aides carrying bulletproof shields. They both escaped uninjured.

The visibly shaken head of state said he saw a ‘flying device’ that exploded before his eyes but no drones appeared to be captured in footage of the incident.

‘This was an attempt to kill me,’ the 55-year-old said later in an impassioned retelling of the events. ‘Today they attempted to assassinate me.’

Video showed hundreds of soldiers who were assembled in neat formation on a wide road scatter in all directions amid the sound of screaming. Microphones could be heard being dropped at the state channel that was filming the event, which quickly froze.

In a statement three hours later, Maduro said ‘everything points’ to a right-wing plot that early investigation suggested was linked to Colombia, its president Juan Manuel Santos, and the US state of Florida – where many Venezuelan exiles live. He said several plotters had been arrested, without giving any further details.

Yet immediately Maduro’s account of the incident was engulfed in controversy, with Colombia dismissing the claim its citizens were responsible as ‘baseless’ and fire officials saying the noises were caused by a gas explosion in a nearby apartment block. Meanwhile, a little-known group claimed responsibility in a single unverified tweet.

Maduro was mid-speech at an event to commemorate the 81st anniversary of the Bolivarian National Guard when a ‘flying device’ exploded right in front of him at 5.40pm, according to a televised account he gave after the event.

‘To the conscious Venezuela, we are going to bet for the good of our country, the hour of the economic recovery has come and we need…’ Mr Maduro was saying before he suddenly stopped talking after hearing an explosion.

Within seconds, there was a second explosion and pandemonium ensued, with guards carrying bullet-proof shields rushing the premier and his wife off the stage.

Uniformed members of the country’s National Guard lined up in the parade then suddenly broke ranks and began scattering in all directions to the sounds of microphones dropping at the state TV channel before the camera cut away.

A photograph later showed an injured military official clutching his bloody head as he was carried away by colleagues.

‘It was an attack to kill me, they tried to assassinate me today,’ Maduro said in the later broadcast, as he said a number of suspects had already been arrested.

Maduro said the ‘far right’ domestic opposition had carried out the attack with help from Venezuelan exiles in the United States and Colombia, as well as Colombia’s President Juan Manuel Santos – a harsh critic of the socialist who has accused him of undermining democracy.

He specifically named Florida – a city with a large Venezuelan expat population – as the source of the plotters. Some of the ‘material authors’ of the attack have been detained, he said, without giving any more details.

Colombia denied any involvement, while a senior Colombian official speaking on condition of anonymity said Maduro’s accusation was ‘baseless’. Tensions are high between both countries over Colombia’s decision to welcome thousands of Venezuelan refugees.

Maduro’s Communications Minister Jorge Rodríguez accused Venezuela’s right-wing opposition of carrying out the attack to avenge their loss in May’s presidential elections – which was widely seen as rigged.

However, Hasler Inglesias, a youth leader in the opposition Voluntad Popular Party, dismissed the claim.

‘We didn’t know what was happening,’ he told the BBC. ‘It’s hard to believe that the opposition is going to make an attempt when they have never made an attempt in this way in 20 years.’

Adding to the confusion, a little known group calling itself Soldiers in T-shirts claimed responsibility, saying it planned to fly two drones loaded with explosives at the president, but government soldiers shot them down before reaching its target. Its members described themselves as ‘dissident soldiers’.

‘We showed that they are vulnerable,’ the group tweeted to 90,000 followers. ‘It was not successful today, but it is just a matter of time.’

Meanwhile, others even suggested the attack had been faked by the Maduro regime to stoke patriotism and legitimize a purge of its enemies.

Three fire officials at the scene of the blast disputed the government’s version of events, claiming the attack was actually a gas tank explosion inside the Residencias Don Eduardo apartment building.

Smoke could be seen coming out of a building window at the site of the incident.

The attack happened during an event celebrating the National Guard’s 81st anniversary. Pictured are guards massed in formation before hearing the explosions

Maduro and his allies have been quick to use the incident to paint an image of a loyal regime under attack from opposition politicians consorting with foreign powers, especially the US and Colombia.

‘That drone came after me,’ he said. ‘But there was a shield of love that always protects us. I’m sure I’ll live for many more years.’

Attorney General Tarek William Saab said the attempted assassination targeted not only Maduro, but rather the military’s entire high command on stage with the president.

Prosecutors have already launched their investigation and obtained critical details from the suspects in custody, said Saab, adding that he would give more details.

‘We are in the midst of a wave of civil war in Venezuela,’ Saab said.

David Smilde, a senior fellow at the Washington Office on Latin America who has spent decades researching Venezuela, said the incident did not appear to be a staged attack by Maduro’s government for political gain.

The ‘amateurish’ attack prompted embarrassing images of Maduro cut off mid-sentence with droves of soldiers running away in fear, making the president appear vulnerable, Smilde noted. Despite the optics, Smilde said he suspected that Maduro would nonetheless find a way to take advantage of it.

‘He will use it to concentrate power,’ Smilde said. ‘Whoever did this, he’ll use it to further restrict liberty and purge the government and armed forces.’

Venezuela’s government routinely accuses opposition activists of plotting to attack and overthrow Maduro, a deeply unpopular leader who was recently elected to a new term in office in a vote decried by dozens of nations.

Maduro has steadily moved to concentrate power as the nation reels from a crippling economic crisis.

In the midst of near-daily protests last year, a rogue police officer flew a stolen helicopter over the capital and launched grenades at several government buildings. Oscar Perez was later killed in a deadly gun battle after over six months on the lam.

The event had been just one more of many Maduro routinely holds with members of the military, a key faction of Venezuelan society whose loyalty he has clung to as the nation struggles with crippling hyperinflation and shortages of food and medicine.

‘We are going to bet for the good of our country,’ Maduro declared triumphantly moments before the explosion. ‘The hour of the economy recovery has come.’
DAILY MAIL