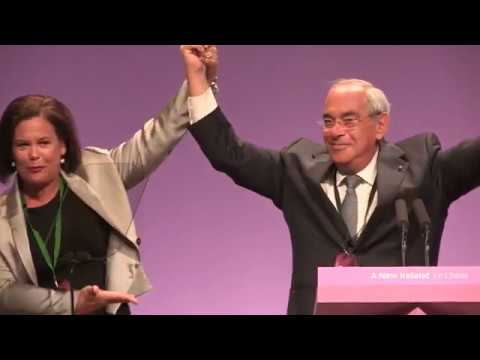 It holds seven of Northern Ireland’s 18 seats—the second-largest bloc after the Democratic Unionist Party (DUP)—at Westminster, where it follows a policy of abstentionism, refusing to attend parliament or vote on bills. It is the third-largest party, and the largest party on the left, in the Oireachtas, the parliament of the Republic of Ireland.

Dr Afif Safieh (68) ) is a Palestinian diplomat. He was most recently the Palestinian ambassador to the Russian Federation.

Safieh, who was born in Jerusalem to a Christian family, attended school in Jerusalem’s College Des Frères. In 1972, he obtained a degree in Political Science and International Relations from the Catholic University of Louvain, Belgium. He continued his education at the Paris Institute of Political Studies in Paris, graduating in 1974.

From 1976 to 1978 he served as deputy director of the Palestine Liberation Organization Observer Mission to the United Nations Office at Geneva. In 1978 he worked as a staff member in Yasser Arafat’s office in Beirut, in charge of European Affairs and UN institutions. In 1981, he became a researcher at the Centre for European Studies in the Catholic University of Louvain, and from 1985 to 1987 was invited as visiting scholar at the Centre for International Affairs, Harvard University.

From 1987 until 1990, Safieh served as PLO representative to the Netherlands. During his service, he was involved in the 1988 Stockholm negotiations that led to the first official and direct American-Palestinian dialogue. In 1990, he became Palestinian General Delegate to the United Kingdom. In January 1995, he was invited to join the International Board of Trustees of the Vatican-sponsored Bethlehem University. Nominated Palestinian General Delegate to the Holy See, he presented his letter of credentials to Pope John Paul II on November 6, 1995.

On October 27, 2005 he was appointed to head the PLO office to the United States, Washington, DC. He only served in Washington for two and a half years, having lectured students and US citizens from the west coast to the east coast about the Palestinian struggle at a wide range of universities and institutes.

In May 2008, Afif Safieh was appointed to serve as the Palestinian ambassador to the Russian Federation, he presented his letter of credentials to President Medvedev on September 18, 2008.

Afif Safieh was nominated in June 2009 as Palestinian Roving Ambassador for Special Missions, based in London.

During the Fateh sixth national conference held in Bethlehem, August 2009, Ambassador Safieh was elected to the Fateh Revolutionary Council – the parliament of the Fateh movement.

Afif Safieh is considered the most experienced and skilled Palestinian diplomat having served in the three most politically significant capitals: London, Washington, and Moscow.