Anti-US protests in Iran after Trump withdraws from nuclear deal 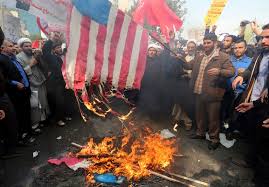 Iranians set fire to a makeshift US flag during a demonstration after Friday prayer in the capital Tehran on May 11, 2018.
Share:

Hundreds of demonstrators shouted anti-American chants at rallies in Tehran and other Iranian cities on Friday, protesting against US President Donald Trump’s Tuesday decision to withdraw from the Iran nuclear deal.

They chanted, “Mr. Trump you cannot do a damn thing,” and, “We fight. We die. We don’t surrender,” in streets festooned with anti-US and anti-Israeli banners and posters.

“For the past four decades during Friday prayers, hundreds and sometimes thousands of staunch government supporters gather and chant ‘death to America’,” said FRANCE 24 Tehran correspondent Reza Sayah. “But ever since 2015, when Iran, the US and the other signatories signed the nuclear deal, those ‘death to America’ chants had been milder.”

On Friday “they were perhaps louder than they have ever been,” Sayah observed. The demonstrators “were mostly hardliners, religious conservatives, who have long mistrusted the US and say that the US withdrawal shows that Iran should never have trusted them – not the Obama Administration, not the Trump Administration.”

A member of Iran’s clerical elite expressed similar sentiments on Friday. “America cannot do a damn thing. They have always been after the toppling of Iran’s regime and this exit is in line with that aim,” Ayatollah Ahmad Khatami said in a televised address to worshippers at Tehran University.

The JCPOA (Joint Comprehensive Plan of Action) – as the Iran deal is formally known – was signed by the UK, France, Germany and the EU, along with Iran, the US, Russia and China.

For his part, Iran’s foreign minister Mohammad Javad Zarif will embark on a diplomatic tour to try to salvage the nuclear deal.

He will leave late Saturday for visits to Beijing, Moscow and Brussels, a spokesman said Friday, holding meetings with all five of the remaining parties to the 2015 nuclear deal.

Along with Rouhani, Zarif is widely regarded as one of the moderates in the Iranian government.

“The moderates, of course, were not chanting ‘death to America’, but they, too, are disappointed,” said Sayah. “They were hoping that this nuclear deal would deliver a better economy, better relations with the West – obviously that hasn’t happened.”

The key question moving forward for Iran’s moderate President Hassan Rouhani is: Will the moderates, and the hardliners who were out on the street today, unite and rise up against him?”