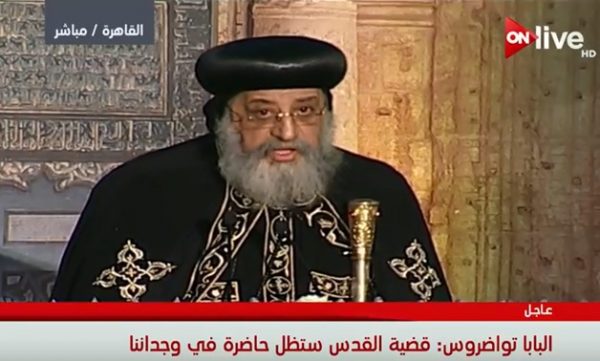 Pope Tawadros delivers speech during the International Conference in Support of Jerusalem that kicked off on Wednesday- TV screenshot
Share:

CAIRO , EGYPT – “We refuse violence, coercion and religiousness of Arab Palestinian conflict. We also refuse the use of religion away from its main purposes. We refuse extremist explanations of Torah that deny others and impinge on their rights,” said Pope Tawadros II of Alexandria.

During his speech at the International Conference in support of Jerusalem on Wednesday, Pope Tawadros said that the Coptic Orthodox Church’s firm stance regarding Jerusalem comes from its commitment toward common living aspirations and the common destiny.

He also said that the church declared its complete rejection of the U.S. decision to move the U.S. Embassy to Jerusalem, adding that this decision will lead to judaizing Jerusalem.

He further remarked that the church has never gone into conflicts with any entity or religion, and refuses intolerance and wars.

The cause has cultural, economical and historical aspects, and putting the cause into the religious dimension is a disaster; consequently, Pope Tawadros said that the church is committed to the rights of subjugated, persecuted and exiled people.

“We always stand beside those who struggle for their rights and humanitarian dignity and refuse coercion and violence.”

He called on the Arab world to think of how Palestinians could restore their legitimate rights since the resolutions of the United Nations and Security Council have not been put into effect.

Consequently, he remarked that a study on the Jerusalem status in terms of the tragic humanitarian conditions witnessed by Palestinians struggling for their legitimate rights should be conducted.

He referred that it is very important to come together to resolve this important issue as Jerusalem is not just place of historic monuments, but it represents a special value of faith, aspirations and memory. It is also a symbol for peace and security.

He pointed out that church has long exerted efforts throughout its history to resolve the Palestinian issue and stand beside Palestinians.

Al-Azhar organized the International Conference in Support of Jerusalem which kicked off on Wednesday morning and witnessed the attendance of the Palestinian President Mahmoud Abbas.

Slated to run for two days, the conference started screening a documentary film about Al-Azhar’s long standing efforts to support the Palestinian cause, and also contained other powerful on-the-ground footages from Palestine.

The conference hall received ministers and senior officials from Egypt and more than 80 other countries, and was adorned with a great three-dimensional constructs of Al-Aqsa Mosque with Palestinian flags on its right and left.

Last December, Trump announced that he had decided to officially recognize Jerusalem as the capital of Israel amid growing global and regional condemnations. Several protests accordingly broke out at U.S. embassies around the world.

For its part, Al-Azhar strongly condemned the recognition of Jerusalem as the capital of Israel, describing it as an “illegitimate and reckless step” and an unacceptable attempt to falsify history.