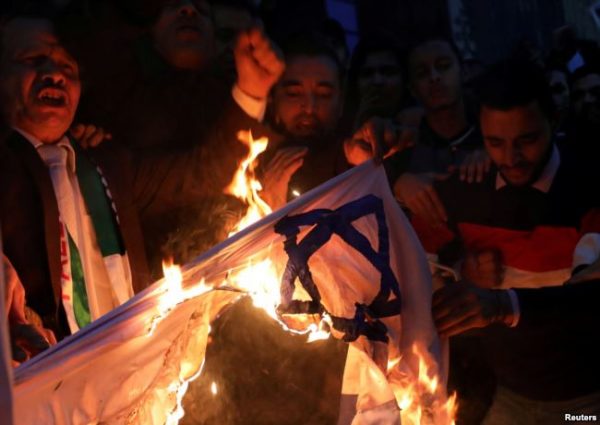 People shout slogans against Israel while burning a makeshift Israeli flag during a protest against U.S. President Donald Trump’s Jerusalem declaration, in front of the Syndicate of Journalists in Cairo, Egypt, Dec. 7, 2017.
Share:

The White House on Thursday denied that the president’s announcement on moving the U.S. Embassy in Israel to Jerusalem meant his administration was pulling out of the Middle East peace process.

“In fact, in the president’s remarks, he said that we are as committed to the peace process as ever, and we want to continue to push forward in those conversations and those discussions,” White House press secretary Sarah Huckabee Sanders told reporters. “And hopefully the ultimate goal, I think, of all those parties is to reach a peace deal. And that’s something that the United States is very much committed to.”

No other country has immediately followed President Donald Trump’s lead in planning to relocate its embassy from Tel Aviv to Jerusalem, something the White House is acknowledging.

A day after the president’s declaration that Jerusalem is the capital of Israel, the Russian ambassador in Israel, Alexander Shein, said Moscow could move its embassy to West Jerusalem “after the Palestinians and the Israelis agree on all issues of the final status of the Palestinian territories.”

In response to Trump’s announcement, Palestinian factions announced that Friday would be a “Day of Rage,” while the Islamist group Hamas called for an uprising against Israel.

The Israeli military said one of its aircraft and a tank had targeted two militant posts in the Gaza Strip after three rockets were launched at Israel.

The Al-Tawheed Brigades — which has ignored the call of Hamas, the dominant force in Gaza, to desist from firing rockets — claimed responsibility for the launches.

Stone-throwing Palestinian protesters have clashed with Israeli troops, who responded by firing tear gas, rubber bullets and live bullets, on Gaza and the West Bank in response to Trump’s announcement.

Trump said Wednesday that he was directing the State Department to begin drawing up architectural plans for a U.S. embassy in the holy city. But the actual relocation of the embassy would take years, according to White House officials.

Both Secretary of State Rex Tillerson and Defense Secretary Jim Mattis expressed concern about the timing of Trump’s announcement, according to U.S. officials.

Asked by VOA whether the president’s declaration had been delayed at the request of the two Cabinet members in order to put in place adequate security at U.S. embassies, Sanders said the decision was made only after “a thoughtful and responsible process” and that “components of the decision went through the full interagency process.”

Palestinian officials said Trump’s decision had disqualified the U.S. as an honest broker in the peace process.

Many U.S. allies also disagreed with the move. The U.N. Security Council and the Arab League plan to meet soon to discuss the action.

Tillerson defended the decision on a visit to Vienna.

“All of Israel’s government offices are largely in Jerusalem already, so the U.S. is just recognizing the reality of that,” the secretary of state said. He noted, however, that Trump “also said the U.S. would support a two-state solution if that is the desire of the two parties, and he also said this does not in any way finalize the status of Jerusalem.”

The Russian foreign minister, with whom Tillerson met Thursday in Vienna, warned that if Washington prematurely moved its embassy to Jerusalem, it could endanger the two-state solution.

“We have asked them to explain the meaning of the decisions on eventually moving the U.S. Embassy in Israel from Tel Aviv to Jerusalem,” Sergei Lavrov told reporters. “We have asked to explain what consequences of this move the Americans see for the efforts taken under the U.N. aegis and by the Quartet of international mediators.”

The Quartet, established in 2002, consists of entities involved in mediating the Israeli-Palestinian peace process. The members are the United Nations, the United States, the European Union and Russia.