Clashes break out in West Bank over Trump Jerusalem speech 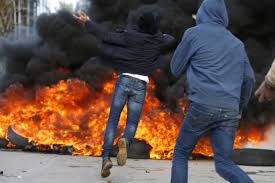 RAMALLAH, West Bank — Clashes between Palestinian protesters and Israeli soldiers broke out Thursday in Ramallah and other places in the West Bank and Gaza Strip, one day after President Trump announced that his administration would recognize Jerusalem as Israel’s capital.

The Palestinian Authority called for a general strike in Palestinian cities and, in Gaza, the Islamist Hamas movement urged its followers to ignite a third intifada, or uprising, against Israel.

At a checkpoint near Ramallah, Israeli forces fired dozens of rounds of tear gas and stun grenades at hundreds of Palestinian protesters gathering to air their anger over Trump’s statement.

They burned tires and pelted the soldiers with rocks.

“This will be bad,” said an ambulance driver.

Clashes also erupted in East Jerusalem and at the border fence between Israel and Gaza. There were early reports of injuries on both sides.

Trump’s announcement Wednesday that he would move the U.S. Embassy from Tel Aviv to Jerusalem and his declaration that the United States recognizes Jerusalem as Israel’s capital reversed a decades-old U.S. policy. Many fear that the step could spark another bloody conflict in the region.

Hamas leader Ismail Haniyeh called for a new uprising in the Palestinian territories and declared Friday a day of rage.

“Tomorrow should be a day of rage and the beginning of a broad movement for an uprising that I call the intifada of freedom of Jerusalem,” he said.

He called on the Palestinian Authority to stop security coordination with Israel and “enable the resistance in the occupied West Bank to respond to this blatant aggression.”

“Our people and factions of the resistance are in a permanent meeting to follow developments to confront this strategic threat that threatens the city of Jerusalem,” he added.

Israel’s army said it was preparing for an increase in violence in the coming days and that it has beefed up its troops in the West Bank, adding reinforcements to its combat intelligence and territorial defense units.

U.S. institutions in the region were also readying themselves for possible violent fallout. Reuters reported that a State Department communique has been sent to diplomats at the embassy in Tel Aviv with talking points to convey to Israeli officials.

“While I recognize that you will publicly welcome this news, I ask that you restrain your official response,” Reuters quoted the document dated Dec. 6 as saying. “We expect there to be resistance to this news in the Middle East and around the world. We are still judging the impact this decision will have on U.S. facilities and personnel overseas.”

In his televised speech Wednesday, Trump said that presidents before him had signed a waiver delaying the recognition of Jerusalem under the belief that it might advance the cause of peace. But, he said, “after more than two decades of waivers, we are no closer to a lasting peace agreement between Israel and the Palestinians. It would be folly to assume that repeating the exact same formula would now produce a different or better result.”

“Therefore, I have determined that it is time to officially recognize Jerusalem as the capital of Israel,” he said.

Successive U.S. administrations have held off moving the embassy from Tel Aviv since the mid-1990s, in line with an international consensus that Jerusalem’s status should be decided in a final peace agreement between the Israelis and Palestinians.

Israelis see Jerusalem as their eternal and undivided capital, while Palestinians envision the predominantly Arab eastern part of the city as the future capital of a Palestinian state. Palestinian Authority President Mahmoud Abbas said the U.S. move would galvanize the Palestinian struggle for independence.

Following Trump’s announcement, Abbas said the United States could no longer be a fair mediator in the peace process between Israelis and Palestinians.

The Palestinian Authority called for three days of rage and ordered all Palestinians national institutions in the West Bank and Gaza to observe a general strike on Thursday. Schools and government offices from Ramallah to Hebron were shuttered.

With backing from Turkey, the Palestinians said that recognizing Jerusalem was in breach of both international law and U.N. resolutions. Eight countries on the 15-member U.N. Security Council called for an emergency meeting to discuss the matter. It is scheduled for Friday.

Despite the note of caution from the State Department, the mood in Israel was buoyant, with government ministers and commentators declaring a diplomatic victory for the Jewish state and for Prime Minister Benjamin Netanyahu.

Speaking at a Foreign Ministry conference in Jerusalem on Thursday, Netanyahu heralded Trump’s recognition of Jerusalem as a “historic statement.”

“President Trump has always linked himself to the history of our capital,” he said. “His name will now float along with other names in the context of the glorious history of Jerusalem and our people.”

The prime minister also said he had already been in contact with other countries that were also ready to recognize Jerusalem as Israel’s capital.

“I have no doubt that as soon as the American Embassy moves to Jerusalem, and even before that, many embassies will move to Jerusalem. It’s about time.”

In columns published in Israeli daily Yedioth Ahronoth, commentators Nahum Barnea and Shimon Shiffer also commended Trump for what they called his bravery in  making a move that Israelis see as righting a 70-year-old wrong.

“Those opposed to the American recognition of Jerusalem as Israel’s capital are wrong. Trump is right. He is right about the issue itself: The 70-year-old refusal by the world to formally recognize Jerusalem as the capital of Israel was a foolish mistake, which was the result of diplomatic cowardice and neglect by Israeli governments,” wrote Barnea.

“Moreover, no agreement appears to be anywhere on the horizon. The argument as if the speech would damage the peace process is ridiculous since there is no peace process,” he said.

In his piece, Shiffer compared the U.S. president to the little boy in the Hans Christian Anderson fairy tale, “The Emperor’s New Clothes.”

“He saw reality for what it is and spoke it out loud.”