Sudan’s Bashir asks Russia’s Putin for ‘protection’ from US 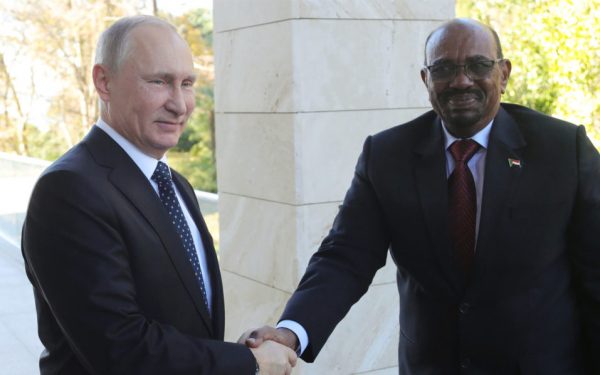 In Russia, Sudan’s Bashir asks Putin for ‘protection’ from US
Share:
Sudanese President Omar al-Bashir, who is wanted by the International Criminal Court for genocide and war crimes, on Thursday asked Russia’s Vladimir Putin to protect his country from the United States.

Speaking during his first visit to Russia as president, Bashir also said he wanted to ramp up military ties and praised Moscow’s military campaign in Syria.

“We have been dreaming about this visit for a long time,” the Sudanese president told Putin at the Black Sea resort of Sochi.

“We are thankful to Russia for its position on the international arena, including Russia’s position in the protection of Sudan. We are in need of protection from the aggressive acts of the United States.”

“We are currently launching a programme to modernise our armed forces and we agreed with the defence minister that Russia will contribute to this,” Bashir said.

Putin said that Russia was keen to intensify economic ties including in agriculture and energy.

“There are prospects not only in the hydrocarbon sphere but also in energy,” Putin said. “There are many prospects of cooperation.”

The visit came a month after the United States lifted a trade embargo it imposed on the impoverished African state in 1997 over Khartoum’s alleged backing of Islamist militant groups.

US President Donald Trump also removed Sudan from a list of countries facing a US travel ban.

Sudan’s deadly conflict in Darfur broke out in 2003 when ethnic minority groups took up arms against Bashir’s Arab-dominated government, which launched a brutal counter-insurgency.

The UN says at least 300,000 people have been killed and more than 2.5 million displaced as a result of the conflict.

Top Sudanese officials including Bashir now claim that the conflict has ended, but the region continues to see regular fighting between numerous ethnic and tribal groups.

Bashir is wanted by the ICC for genocide and war crimes related to the conflict, charges he denies.