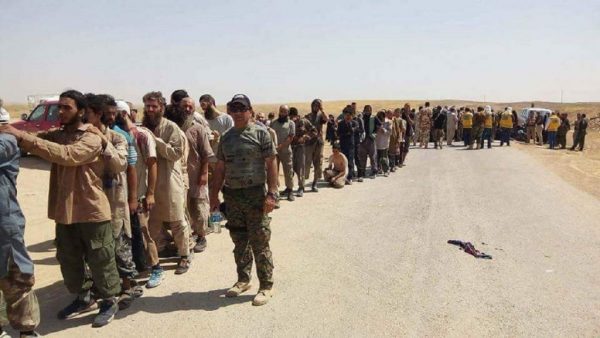 ‘They’re coming out with their hands up, putting their weapons down – full-scale surrender’

US-backed Iraqi forces announced Thursday they have retaken one of Islamic State’s remaining strongholds after hundreds of militants surrendered amid fresh signs the terror group is collapsing and unable to defend its territory.

In uncommon scenes, large groups of militants were turning themselves over to Kurdish Peshmerga forces, in the city southwest of Kirkuk.

The fall of Hawija in northern Iraq, after two weeks of fighting, is the latest in a string of defeats for Islamic State, also known as ISIS, and suggests the rank-and-file fighters are demoralised as the group struggles to defend what remains of the territory it seized in 2014.

“The speed at which the enemy gave up surprised me,” Funk said in a phone interview from Baghdad, after Iraqi Prime Minister Haider al-Abadi announced the liberation of Hawija.

Funk said about 1,000 militants surrendered in the past three or four days of fighting in Hawija. The coalition had estimated up to 1,500 militants were defending the city when the offensive began.

In July, Iraq announced that Mosul, the country’s second-largest city, was retaken from ISIS after about nine months of intense fighting. Since that decisive battle, the pace of Islamic State’s decline seems to have quickened.

US-backed forces in Syria have recaptured about three-quarters of Raqqa, the ISIS headquarters, after about four months of fighting in the city.

ISIS’ fierce reputation rested partly on the willingness of hardcore militants to fight to the last man, and the militants rarely surrendered.

But many of the fanatical foreign fighters who initially provided the leadership have been killed and those remaining on the battlefield are conscripts, who often lack the will to fight.

“They’re coming out with their hands up, putting their weapons down – full scale surrender,” Funk said. “It’s a growing trend.”

Last week ISIS leader, Abu Bakr al-Baghdadi released an audio exhorting his fighters to continue the battle. “I don’t think he’s having much of an effect,” Funk said. The day after the audio was released, several hundred fighters surrendered.

Fighters who surrendered or are captured are held by Iraqi or Kurdish forces.

ISIS swept into Iraq from Syria in 2014, capturing large swaths of territory. From a mosque in Mosul, al-Baghdadi announced the establishment of the group’s so-called caliphate.

Today, as few as 3,000 militants might remain in Iraq in Syria, down from estimates up to 30,000, though officials caution that the numbers aren’t a good measure of the group’s strength.

Coalition officials said the fight is not over, despite the progress. ISIS militants still control a string of towns and villages stretching along the Euphrates River in Iraq and Syria, where they are expected to make a last stand.

The victory in Hawija came as Baghdad and Iraq’s Kurdish region remain in a political deadlock following a controversial Kurdish independence referendum. But on the battlefield Iraqi and Kurdish forces continue to collaborate, squeezing the jihadis who once controlled nearly a third of the country.

Abadi made the declaration on Thursday at a news conference in Paris with French President Emmanuel Macron, who has offered to help mediate between Iraq’s government and the autonomous Kurdish region, which voted for independence last week.

“I want to announce the liberation of the city of Hawija today,” Abadi said, calling it a “victory not just for Iraq but for the whole world.”

Still, Abadi’s government is struggling to contain the fallout from the independence vote, which, while not binding or expected to lead to the formation of a Kurdish state anytime soon, was rejected as illegal by the Baghdad government as well as neighboring Turkey and Iran.

Iraq’s central government has imposed a flight ban on the Kurdish region, while Turkey and Iran have sent troops to the land-locked region’s borders to signal their opposition to any redrawing of the map.

Turkish President Recep Tayyip Erdogan on Thursday appeared to threaten a blockade of the Kurdish region, saying: “All airspace will be closed, flights have already been banned. … Soon the borders will be closed too.”