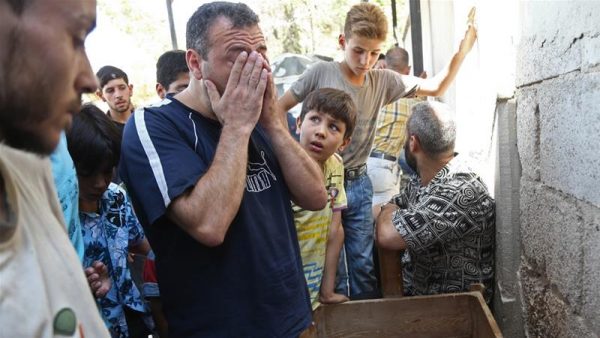 Eastern Ghouta is one of four “de-escalation zones” announced in May [Abdulmonam Eassa/AFP]
Share:
By Louisa Loveluck
BEIRUT — Civilian casualties have spiraled across Syria in recent weeks as pro-government forces launch hundreds of bombing raids across areas marked for international protection.
Groups monitoring the conflict have recorded hundreds of strikes since the end of a sixth round of peace talks among Russia, Iran and Turkey in mid-September. On Friday, the White Helmets rescue group reported that 80 percent of those attacks targeted civilian areas.

September was the deadliest month on record this year in Syria, according to the Syrian Observatory for Human Rights monitoring group, with almost 1,000 civilians killed across the country.

“Now the planes are back, there is just terror all the time,” said Tim al-Siyofi, an activist from the besieged Damascus district of Douma.

Analysts took the violence as a sign that piecemeal cease-fires struck in the Kazakh capital of Astana have done little to change the core objectives of the Syrian government. With support from Russia and Iran, President Bashar al-Assad’s military is ascendant and on course to reclaim most of the territory that slipped from its grasp during six years of war.

They also said it underscored the paucity of diplomatic options for the United States and European nations, which championed an earlier, U.N.-backed process without success, and now hold little leverage over any side in the conflict.

“For the international community, who have failed in large part to see through this process, a return to violence may have larger implications for their attempts to push for a political and sustainable solution,” said Emma Beals, a Beirut-based expert monitoring the war in Syria.

Attacks by government and Russian warplanes followed a failed al-Qaeda-led offensive in the western province of Hama.

In the next-door province of Idlib, a rebel stronghold in which the peace talks are meant to have guaranteed a cease-fire, warplanes have targeted the hospitals in which many of the wounded would have sought treatment.

Interviews with civilians in the area were interrupted on several occasions by the sound of rocket fire and explosions. Inside the Idlib and Kafr Takhareem hospitals during one nighttime attack, staff said they were overwhelmed with the number of casualties.

“Our emergency room is full during the bad nights, so we’re treating casualties in the chairs. The dead are wrapped in blankets and laid on the ground as we work,” said a 34-year old medic who gave his name as Abdulhamid.

In the Damascus suburbs, areas covered by the truce have also come under sustained attack, with strikes hitting civilian homes and a rehabilitation clinic for victims of earlier bombings.

In a video from Douma, a father held the wrapped body of his son tightly. “Why did you leave, we have just started our life,” he repeated.

With the bombings, rebel corruption and infighting, Siyofi, the activist, said trust in the community has plummeted. “People say we do not want either the regime or the armed groups, we just want to eat, open the sieges and to live in peace and not to get bombed.”

Under the terms of the Astana agreement, four areas have been named as “de-escalation zones”: Idlib, portions of the Damascus suburbs and the central province of Homs, and a stretch of land in Daraa province along the Jordanian border.

Each area has been the subject of flurries of diplomacy to reduce violence or restore the areas to government control under deals that a United Nations inquiry has criticized for spurring the forced displacement of opposition supporters.

“The de-escalation process is allowing Assad to continue to implement this strategy within the framework of an internationally sanctioned political process,” Beals said.

Government and Russian airstrikes appear to have been concentrated in areas around the strategic M5 highway, a vital artery for the Syrian state that runs from Damascus through Homs and on to Aleppo, which was recaptured from rebel forces last December .

On Saturday, Turkish troops readied along their southern border with Syria, suggesting that an attempt to enter Idlib could be imminent.
President Recep Tayyip Erdogan said that the operation was a “new step” to establish security in the de-escalation zone across the border and that Turkey would not desert civilians there. Separately, Turkey’s official Anadolu news agency said that any deployment would be intended to achieve de-escalation, rather than engaging local militia or the Syrian army.

But others saw few gains to be made.

“Astana is just like a piece of fabric stretched over parts of the country,” said Ahmed Rahhul, a former general in Assad’s army who now works as an Istanbul-based military analyst. “These de-escalations freeze the problem, they do not solve it.”