US reconfirms its continued support for the Lebanese army 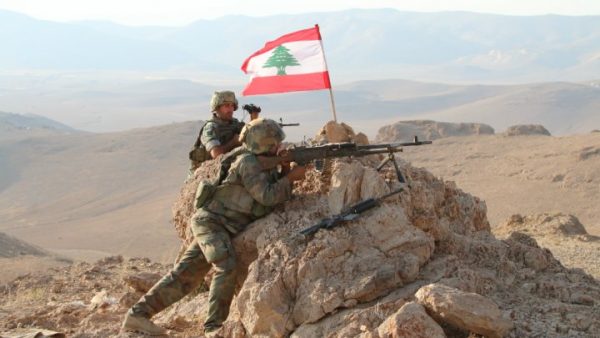 A senior U.S. general and Lebanese military sources have reconfirmed that that U.S. support for the Lebanese army will continue.

Votel lauded “the performance of the participating units and assured that U.S. support for the Lebanese army with arms and equipment will continue in order to develop its capabilities and reinforce its missions,” the statement said.

Aoun for his part thanked the U.S. general for his call and emphasized to him that “the U.S. aid for the army played an effective and essential role in the success of this operation.”

A Lebanese military source meanwhile told al-Hayat newspaper in remarks published Thursday that “U.S. assistance for the army will continue and it will soon receive three Super Tucano planes and a number of tanks from the U.S. army.”

Another senior Lebanese military source told al-Joumhouria daily that “international support for the army is still ongoing and nothing changed after the end of the battle” against Islamic State militants in the outskirts of the border towns of al-Qaa and Ras Baalbek.

“The Americans will carry on with the arming program that had started years ago and they have informed the Army Command of this. Reports that they have halted military aid and withdrawn military equipment are totally baseless,” the source underlined.

The source also noted that “U.S. military delegations will soon visit the Army Command, which refutes all rumors that are being circulated with the aim of undermining the morale of the military institution.”

“New batches of U.S. arms will soon be delivered to the army, including Super Tucano planes, Bradley Fighting Vehicles and other types of weapons,” the source revealed.

An Nahar newspaper had reported Wednesday that the U.S. administration has been dismayed by “Lebanon’s submission to an agreement led by the Syrian regime and Hezbollah” that resulted in the evacuation of IS militants from the eastern border region.

“Washington has decided to cease military support to Lebanon and retrieve around 50 modern tanks that it had convinced Riyadh to pay for and supply to the Lebanese army to support it in its battle against terrorism,” An Nahar reported .

The army had launched an unprecedented military offensive to oust IS militants from the eastern border region on August 19. Separately but simultaneously, Hezbollah  and the Syrian army launched  an assault to remove IS from the Syrian side of the border.

Simultaneous ceasefires were announced on both sides of the border on Sunday morning to allow for negotiations over the fate of nine Lebanese troops abducted by IS militants in 2014.

The Lebanese army has insisted that it has not coordinated any move with Hezbollah  or the Syrian army.

The Hezbollah-led agreement resulted in the recovery of nine bodies likely belonging to the captive troops, the evacuation of hundreds of IS militants and their families from the Lebanese-Syrian border to eastern Syria, and the handover of a Hezbollah captive and several corpses to the Iran-backed group.

The U.S.-led coalition said Wednesday it carried out airstrikes to disrupt a convoy of Islamic State militants being evacuated from the Lebanon-Syria border to an IS-held area in eastern Syria near Iraq, without targeting the evacuees themselves.

Coalition aircraft struck a small bridge and cratered a road to hinder the convoy’s progress. The coalition also struck a separate group of IS militants traveling to meet the convoy, according to Col. Ryan Dillon, a coalition spokesman.

U.S. officials  criticized the transfer of hundreds of militants and civilians who are bound for an IS-held area near the Iraqi border, saying the extremists should be killed on the battlefield.