Netanyahu was too emotional and close to panic during meeting with Putin: Pravda 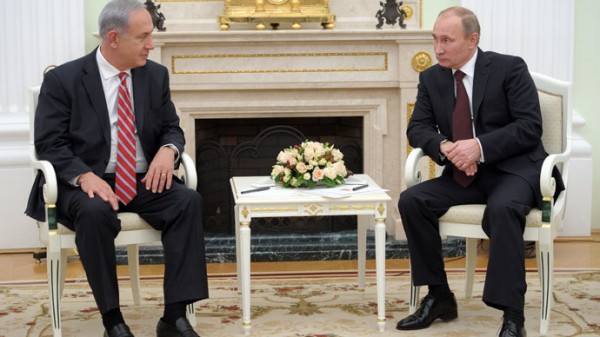 Benjamin Netanyahu’s nightmare is coming true. The guards of the Islamic Revolution of Iran and Hezbollah fighters prepare to attack Israel by using Syria as a springboard. The Israeli Prime Minister shared the “terrible news” on August 23, 2017 during a meeting with Vladimir Putin in Sochi (the meeting lasted for almost 2.5 hours). Despite Netanyahu’s emotional state, the Russian leader remained calm, Russian daily Pravda reported

“Iran is Russia’s strategic ally in the Middle East,” Putin said. “But Israel is also an important partner for Russia in the region,” he added.

Benjamin Netanyahu is a frequent guest in Russia. In 2016, the Prime Minister of Israel visited the Russian Federation twice: in April and June. His most recent visit to Sochi for a meeting with Putin is also a second one during the current year: he visited Moscow in early March 2017.

Netanyahu, 67,  could not keep composure at a meeting with Vladimir Putin in his Sochi residence of Bocharov Ruchei, Pravda stressed

According to eyewitnesses of the open part of the talks, the Israeli prime minister was too emotional and at times even close to panic. He described a picture of the apocalypse to the Russian president that the world may see if no efforts are taken to contain Iran, which, as Netanyahu believes, is determined to destroy Israel.

Netanyahu also told Putin that Israel was extremely concerned about Iran’s participation in the Syrian conflict. According to him, Tehran is working on “creeping expansion” in the Middle East under the pretext of a peaceful settlement in Syria. Iran, he added, supplies weapons to Hezbollah fighters and gradually attracts Lebanon, Iraq and Yemen in the sphere of its influence.

According to experts, Netanyahu does not exaggerate too much when he talks about Tehran’s plans to expand its influence throughout the Middle East. On August 22, Deputy Minister of Foreign Affairs of Iran Hossein Jaberi Ansari arrived in Beirut, where he held talks with Secretary-General of Hezbollah movement, Hassan Nasrallah . The next day he had a meeting with Lebanese Prime Minister Saad Hariri, who said: “Israel and terrorism are the two main threats that Lebanon and the whole region of the Middle East are facing today.”

On July 23, 2017, Iraqi Defense Minister Irfan al-Hayali arrived in Tehran to sign a protocol with his Iranian counterpart  Hossein Dehghan to strengthen military cooperation. Tehran’s success is impressive against the background of the fact that Baghdad is considered a puppet government of Washington. Nevertheless, when Donald Trump calls Iran a “terrorist state”, the Iraqi Defense Minister signs an agreement with Iran to cooperate in the struggle against terrorism.

To give a better understanding of Tehran’s growing influence in the Middle East, one should pay attention to Iran’s interference into the internal conflict in Yemen. Iran finances and arms Houthis in Yemen, a militant group of Shiite Zaidites that have been conducting an armed struggle against the government of Yemen since 2004. All these years, the Houthis have been inflicting serious military strikes on coalition forces led by Saudi Arabia.

What about Moscow? While Netanyahu was feverishly describing the sinister scenario to Putin, the latter was sighing with sympathy, as if saying: “Unfortunately, we can not help you here.”

The truth is that Tehran is the only counterbalance for Moscow to the powerful alliance of wealthy Arabian monarchies that try to establish an Arab analogue of NATO in the endeavor to impose Washington’s rules in the entire Middle East, Pravda asserts

Therefore, the Kremlin is interested to further strengthen Tehran’s influence in the region. The question of accepting Iran into the Shanghai Cooperation Organization (SCO) has almost been resolved. It is Russia that advocates the early adoption of Iran at the SCO. When it happens, the fact itself will remove US plans for air strikes on the Iranian territory. Most likely, the Pentagon will not risk attacking a member of the SCO, where Russia and China, permanent members of the UN Security Council, act as locomotives. To crown it all, Iran has already purchased S-300 air defense systems from Russia and put them on operational duty.

Benjamin Netanyahu failed to convince Russian President Putin of the need “to stop Iran’s expansion in the Middle East.” Israel is a friendly country for Russia, but it is not up to Tel Aviv to teach the Kremlin how to structure Russia’s policy in the Middle East, Pravda concluded .

The Pravda paper is the former  official newspaper of the Communist Party of the Soviet Union.