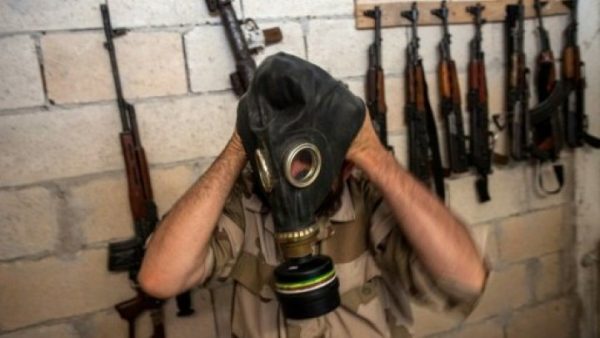 This week’s revelation of two North Korean shipments suspected to be chemical weapons and intercepted on their way to Syria may be just the latest sign of Pyongyang’s hand in the Syrian regime’s chemical arsenal.

According to a confidential United Nations report, first revealed by Reuters on Tuesday, the two shipments were intercepted at an unspecified time during the past six months. The report, presented to the UN Security Council by the UN’s ‘Panel of Experts’ on North Korea, did not detail when or where the interdictions occurred or what the shipments contained.

However, it did reveal that the shipments were destined for a Syrian government entity known as the Scientific Studies and Research Centre, which has overseen the country’s chemical weapons programme since the 1970s.

Neither the North Korean nor the Syrian permanent missions to the United Nations responded to FRANCE 24’s request for comment on the report’s allegations.

North Korea has long been known to have a sizeable stockpile of chemical weapons, but recent developments suggest that its arsenal is becoming increasingly sophisticated, and deadly.

“North Korea is believed to have chemical weapons stockpiles of around 5,000 tonnes,” says Paul Walker, a former professional staff member of the Armed Services Committee in the US House of Representatives and now director of the environmental security and sustainability programme at the NGO Green Cross International.

Walker has not only taken part in on-site inspections of chemical weapons stockpiles, but also works closely with the Organisation for the Prohibition of Chemical Weapons (OPCW) and similar bodies as part of global efforts to eliminate chemical weapons arsenals.

“Five thousand tonnes is small compared to the declared stockpiles of the likes of the US and Russia, but significantly larger than most other countries, including Syria,” Walker told FRANCE 24.

Much of that is made up of what Walker describes as “World War One-type weapons” such as mustard agent, phosgene and lewisite, known as “blistering agents” for the horrific chemical burns they can cause to the skin.

But it is also suspected to include significant quantities of nerve agents like soman and sarin, the latter of which the Syrian government has been accused of using at numerous points throughout the civil war, most destructively in an attack on the Damascus suburb of Ghouta in 2013 that the US government estimates killed 1,429 people, including at least 426 children.

But the world got a glimpse at the growing sophistication of Pyongyang’s chemical weapons program earlier this year when, on February 13, the half-brother of North Korean leader Kim Jong-un was assassinated at Kuala Lumpur International Airport in Malaysia, in a move widely believed to have been ordered by the North Korean government.

Kim Jong-nam was killed by the nerve agent VX, confirming for the first time that North Korea possesses this extremely lethal chemical in its arsenal – one that could now be making its way to Syria.

“My guess is that those shipments to Syria probably contained VX and precursor chemicals for making VX,” says Walker.

If so, it would mean that a chemical weapon Walker describes as “100 times more deadly than sarin” could be finding its way into one of the most complex and bloody conflicts in living memory, in which close to half a million are estimated to have died and where chemical weapons attacks on combatants and civilians are already known to have taken place.

In fact, it may already be there.

When Syria declared its chemical stockpile to the OPCW in 2013, in the wake of the international outcry that followed the Ghouta attack and facing threats of US military intervention, no nerve agents were included on the list.

However, subsequent inspections found traces of both sarin and VX in samples taken from the Scientific Studies and Research Centre, the same body for which the recently intercepted shipments were earmarked.

“I wouldn’t be surprised if after further inspection, those chemicals are eventually linked back to North Korea,” says Walker.

If so, it would be just the latest in a long line of exposed military links between North Korea and Syria.

The incidents outlined in the UN report are not the first time ships containing North Korean arms have been intercepted en route to Syria, in direct contravention of UN sanctions.

“Then there’s the nuclear collaboration, which led to the Israeli airstrike (at a suspected nuclear reactor site) at Deir ez-Zor in Syria in 2007,” she told FRANCE 24. “Overall there’s a well established and lengthy pattern of military cooperation.”

That this cooperation may have already extended to supplying chemical weapons to Syria would therefore hardly come as a surprise, she says.

Meanwhile, an international community currently fretting over North Korea’s nuclear ambitions amid increasingly bellicose rhetoric may be overlooking a more imminent threat in the form of an extensive chemical arsenal — one that in theory could be put to use at a moment’s notice.

Unlike most nations with a chemical weapons stockpile, the majority of those possessed by North Korea are thought to be “deployed”, meaning they are loaded into artillery shells and rockets ready to be fired, explains Walker. In North Korea’s case, most of these are amassed at the demilitarized zone along the border with South Korea.

“This makes for a very capable chemical weapons offensive threat that could be used to strike Seoul in half an hour if war breaks out.”

“It’s a source of big frustration that it doesn’t get more attention,” he says. “In many ways the threat from chemical weapons is much more realistic than from nuclear weapons.”