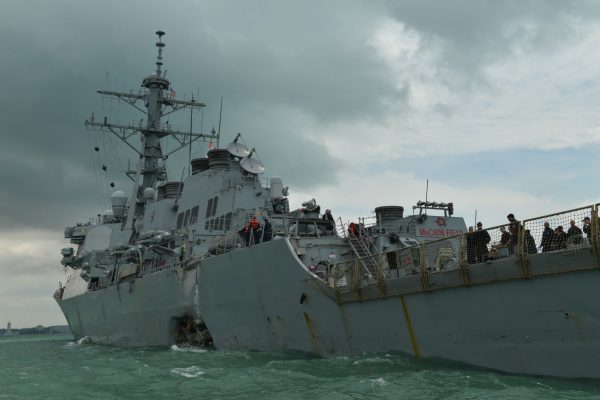 The United States Navy missile destroyer USS John S McCain displaying a hole in its hull as it is towed into the Changi Navy Base off the eastern coast of Singapore, Aug. 21 2017. (Desmond Foo/The Straits Times/Sph/EPA)
Share:

The USS John S. McCain, significantly damaged after colliding with an oil tanker three times its size off the Strait of Malacca early Monday morning, arrived at the Changi Naval Base in Singapore with a large hole in its side just above the waterline.

The search continues for 10 sailors missing after the collision, which caused significant damage to the hull, flooding nearby compartments, including crew berthing, machinery, and communications rooms, the 7th Fleet said in a statement.

This was the second time in two months that a Navy destroyer based at the 7th Fleet’s home port of Yokosuka, Japan, has been involved in a collision at sea, and this latest incident bears similarities.

Seven sailors were killed when the USS Fitzgerald collided with a container ship south of Japan in June, which also led to flooding in berthing compartments.

The McCain, an Arleigh Burke-class destroyer equipped with the Aegis combat system, had been on its way to a routine port visit in Singapore after patrolling in the South China Sea. Shipping data showed the Liberian-flagged merchant vessel Alnic MC was also on its way to Singapore when the ships collided east of the Strait of Malacca at 5:24 a.m. local time, while it was still dark.

The 550-mile-long strait runs between the Malay Peninsula and the Indonesian island of Sumatra, connecting the Pacific and Indian oceans. It is one of the world’s busiest shipping lanes but is well governed, analysts say.

The Alnic is more than three times the size of the McCain, with a gross tonnage of 30,000, compared with the destroyer’s 8,300.

Four sailors were medically evacuated from the McCain by a Singapore Armed Forces helicopter and are now in a hospital in Singapore being treated for non-life threatening injuries. A fifth sailor who was injured did not require further medical attention, the 7th Fleet said.

The Navy’s 7th Fleet said Navy Seahawk helicopters and Ospreys were mobilized for the search-and-rescue effort, joining tugboats from Singapore, a Singapore police coast guard vessel, and a Singapore navy ship and helicopters.

“Our first priority is determining the safety of the ship and crew,” Adm. John Richardson, chief of naval operations, wrote on Twitter. “As more information is learned, we will share it.”

The 7th Fleet set up an emergency assistance center in Yokosuka for family members of the McCain crew. President Trump, returning to the White House on Sunday night, responded to reporters’ questions about the collision by saying: “That’s too bad.” Later Sunday night, Trump tweeted, “Thoughts & prayers are w/ our @USNavy sailors aboard the #USSJohnSMcCain where search & rescue efforts are underway.”

The collision marks the fourth time this year a Navy vessel with the 7th Fleet has been involved in a major mishap, an embarrassing string that has prompted the service to remove several senior officers from command.

The others include the deadly collision involving the USS Fitzgerald on June 17, a May 9 incident in which the guided-missile cruiser USS Lake Champlain collided with a South Korean fishing vessel east of the Korean Peninsula and a Jan. 31 mishap in which the guided-missile cruiser USS Antietam ran aground in Tokyo Bay, near its home port of Yokosuka.

The collision Monday came just days after the Navy issued a damning reportlisting errors that led to theUSS Fitzgerald collision.

The seven sailors, who were killed in that incident all drowned in their berth compartments when the container ship struck the destroyer’s side.

The Navy said last week that it would discipline a dozen sailors who were aboard the Fitzgerald, including the top two officers and the top enlisted sailor, whose careers are almost certainly over.

Adm. William F. Moran, vice chief of naval operations, said the sailors who were on watch in the ship’s bridge “lost situational awareness,” contributing to the collision.

Analysts were incredulous that a second destroyer based at Yokosuka could be involved in another collision so soon after the Fitzgerald incident.

Euan Graham, director of the international security program at the Lowy Institute in Sydney, called it “extraordinary” and said it would certainly lead to the asking of pointed questions within the Navy. The incident also could affect the 7th Fleet and its readiness, Graham said.

“They were already stretched after the Fitzgerald collision, and now they’ve lost a second frontline destroyer at an acute time in the region, with the tensions around North Korea and in the South China Sea,” he said.

The Fitzgerald is still being repaired but is expected to return to service.

Photos posted on the McCain’s Facebook page showed the crew fishing and playing cards on the deck at sunset Saturday, during a “patrol in the South China Sea in support of security and stability in the Indo-Asia-Pacific region.”