Hussein Hajj Hassan, who represents the Iranian backed Hezbollah militant group in the cabinet  as  the Minister of Industry   met  on Thursday with Syrian Minister of Economy and Trade, Mohammad Samer al-Khalil during a  personal visit to the Syrian capital , since he was not authorized by the cabinet to represent Lebanon in  any official capacity. Agriculture Minister Ghazi Zoaiter ( who represents the Amal Movement , a close ally of Hezbollah )  and a  private sector delegation accompanied him  for the opening of a  fair in the capital Damascus, NNA reported.

The meeting was attended by the Secretary General of the Higher Lebanese-Syrian Council Nasri Khoury , a delegation of the Lebanese Industrialists Association, and a panel of Lebanese exporters and businessmen.

The Higher Lebanese-Syrian Council was established during the Syrian occupation of Lebanon and for this reason several Lebanese leaders called for abolishing it . The council’s headquarters are in Syria and many in Lebanon accuse Khoury , a member of the Syrian Social Nationalist Party ( SSNP) of bias towards Syria and see no justification for the council after Lebanon and Syria established diplomatic relations and embassies were opened in both Damascus and Beirut .

Both sides agreed on studying the market needs and the means to cover them without putting the economy of any country at stake. 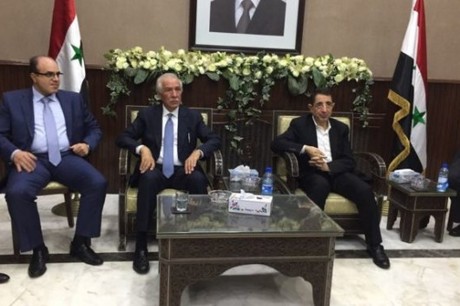 During the meeting, Hajj Hassan tackled the concerns of Lebanon’s industrialists.

For his part, the Syrian Minister explained the measures undertaken by the Syrian government to protect the national economy and production, and maintain monetary stability.

“It is important to carry on communication in order to widen the scope of thinking on many levels, especially in the fields of economy, industry, and trade,” the Syrian Minister told a joint news conference following the talks.

For his part,   Hajj Hassan indicated that talks touched on an array of economic and political affairs.

The idea of the visit  by ministers affiliated with “Hezbollah”, the AMAL Movement and the Free Patriotic Movement (FPM),  sparked internal disputes and a wave of opposition, due to its negative effects on the Lebanese arena.

State Minister for the Displaced Affairs, Moueen al-Merhebi said that the visit would not be official but would be made on a personal basis.

Speaking to Asharq Al-Awsat, he said: “The insistence of some ministers to visit Damascus has caused a major political dispute in the country, forcing Interior Minister Nohad al-Mashnouq to ask to discuss the matter within the government, and put it to vote”.

The minister stressed that any minister visiting Syria would go there in his personal capacity because he would not be in any way dispatched by the government.

Lebanese Forces leader Samir Geagea underlined during a press conference  the importance of the “policy of dissociation”, which was stipulated in the ministerial statement.

“During the last cabinet meeting, PM Saad Hariri refused to discuss any item on Syria’s visit, but some ministers confirmed that they were going to go there in their official capacity. No, if you go to Syria, you go on a personal, not official, basis, and you would be violating Lebanon’s legitimacy, the cabinet principles and the new political era,” Geagea said, addressing ministers insisting on going to Damascus.

He warned that if anyone went to Syria, Lebanon will be immediately classified in the Iran axis, and therefore “we will lose what remains of our relations with the Arab countries.”