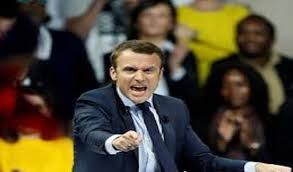 Former US President Barack Obama is wading into the closely watched French presidential election to endorse Emmanuel Macron, the centrist politician widely backed by the establishment in his run against far-right leader Marine Le Pen.

“I have admired the campaign that Emmanuel Macron has run,” Obama says in a video, which Macron shared Thursday. “He has stood up for liberal values, he put forward a vision for the important role that France plays in Europe and around the world. And he is committed to a better future for the French people. He appeals to people’s hopes and not their fears.”

“I’m not planning to get involved in many elections now that I don’t have to run for office again, but the French election is very important to the future of France and to the values that we care so much about,” Obama says in the clip.

“Because of how important this election is, I also want you to know that I am supporting Emmanuel Macron to lead you forward.”

Let’s keep defending our progressive values. Thank you for this discussion @BarackObama. pic.twitter.com/8rhNdHkLo8

It’s unusual for a former US president to make an endorsement in a foreign election, though former US President Bill Clinton backed future British Prime Minister Gordon Brown in 2006. A message left with Obama’s office asking why he felt compelled to support Macron was not immediately returned.

During the French primary, Macron also shared a private phone call of Obama wishing him luck, but not yet endorsing him, on Twitter.

“The main message that I have is to wish you all the best in the coming days,” Obama said in the phone call.

Le Pen — who has harshly criticized the European Union and vowed to pull France out of NATO — has been praised by US President Donald Trump, who told The Associated Press in April she was “strongest on borders, and she’s the strongest on what’s been going on in France.”
CNN