Muslim and Christian clerics meeting in Cairo to promote coexistence 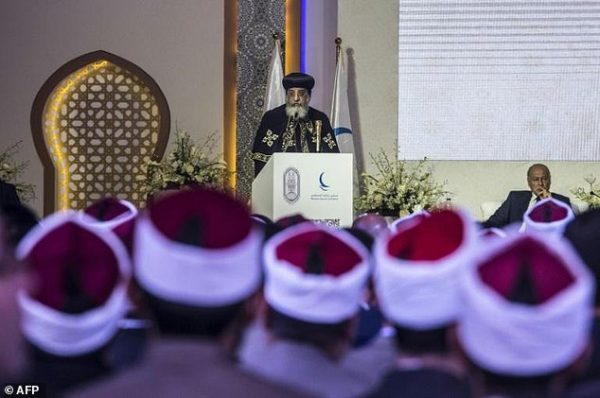 Leader of Egypt’s Coptic Church, Pope Tawadros II of Alexandria speaks at the Freedom and Citizenship conference in Cairo, on February 28, 2017
Share:
Top Muslim and Christian clerics from the Middle East gathered in Cairo on Tuesday for a two-day conference on promoting co-existence, as sectarian conflict continues to ravage the region.

The “Freedom and Citizenship” conference is hosted by Al-Azhar, one of the leading Sunni Muslim authorities based in Cairo.

It comes as Coptic Christians in Egypt’s Sinai flee attacks by Islamic State group jihadists who are waging an insurgency in the peninsula.

“Exonerating religions from terrorism no longer suffices in the face of these barbaric challenges,” Al-Azhar’s head Sheikh Ahmed Tayeb said in a speech on the opening day, referring to regional conflicts.

Tayeb called for dispelling “the lingering mistrust and tensions between religious leaders that are no longer justified, for if there is no peace between the proponents of religions first, the proponents cannot give it to the people.”

He said: “Egypt and the region have suffered from extremist thought resulting from a mistaken understanding of religion that has led to terrorism.”

The conference, including Muslim muftis and Christian clergy such as Lebanese Maronite Patriarch Bechara al-Rahi, is to issue a closing statement on Wednesday.

In Egypt, the group’s affiliate called for war on the Coptic minority after bombing a church in December 2016, killing 29 people.

Tayeb, who represents a more moderate and traditional form of Islam, argues that groups like IS have perverted the religion.