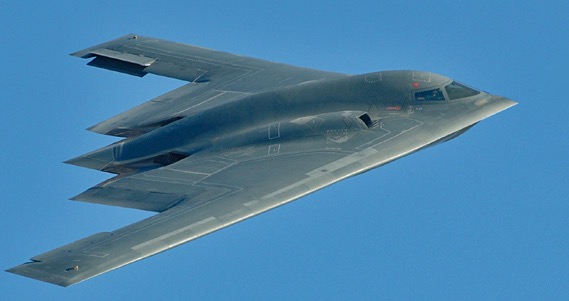 The B-2 Spirit is a multi-role bomber capable of delivering both conventional and nuclear munitions. A dramatic leap forward in technology, the bomber represents a major milestone in the U.S. bomber modernization program. The B-2 brings massive firepower to bear, in a short time, anywhere on the globe through previously impenetrable defenses.
Share:

“We need to strike ISIL everywhere they show up,” Ashton B. Carter, the departing defense secretary, told reporters. “We know that some of the ISIL operatives in Libya were involved in plotting attacks in Europe.”

Islamic State fighters were driven out of Surte, the group’s coastal stronghold, last year by Libyan fighters backed by American air power. After conducting 495 strikes against truck bombs, heavy guns, tanks and command bunkers in the city, the Pentagon’s Africa Command announced an end to air operations on Dec. 19.

But the taking of Surte did not put an end to Islamic State operations in Libya. The militant group is believed to have several hundred fighters in the country. Many of them began to regroup at two training camps about 25 miles southwest of Surte, officials said. Mr. Obama approved airstrikes against the camps this week.

“We had 100 terrorists training,” said Peter Cook, the Pentagon press secretary. “That was a risk we could not accept.”

To buttress its assertions, the Pentagon released surveillance video of the militants at one of the camps unloading rocket-propelled grenades and shells from a truck.

The B-2 bombers dropped more than 100 satellite-guided bombs and were chosen in part for their ability to loiter over the target area, Pentagon officials say.

The Pentagon did not say whether any of the plots it said were being hatched at the camps were imminent, whether senior Islamic State commanders were among the targets, or if Libyan fighters supported by the United States moved in on the ground after the strikes were carried out.

Jonathan Winer, the Obama administration’s special envoy to Libya, told Congress in November that the Islamic State, as it suffered defeats in Surte, was most likely forming cells elsewhere in the country. He called on Libyans to unite behind the country’s fledgling Government of National Accord to combat the terrorists.

A recent analysis by the American Enterprise Institute, a policy organization in Washington, found that Islamic State militants operating as “desert brigades” south of Surte had ambushed Libyan military positions, disrupted supply lines with explosives and established checkpoints on key roads. The Islamic State is recruiting foreign fighters into southern Libya and is most likely relying on the same havens used by Al Qaeda in the Islamic Maghreb, according to the analysis.

Mr. Carter, at a Pentagon news conference, suggested that the Islamic State would continue to have a foothold in Libya as long as the country was racked by internal strife.

“As long as the conditions of civil war are there, the Libyans don’t have the unity,” Mr. Carter said. “If they did, I think they themselves could make short work of ISIL.”

The two B-2 bombers flew a round-trip mission of about 34 hours from Whiteman Air Force Base in Missouri, military officials said. It was the first time that a B-2 had been used in combat since March 2011, when three B-2s carried out airstrikes in Libya.