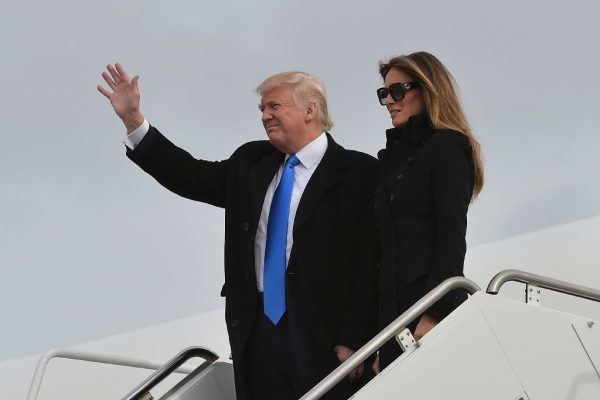 President-elect Donald Trump and his wife Melania step off a government plane at Andrews Air Force Base in Maryland on January 19, 2017, a day ahead of Trump’s inauguration as 45th President of the United States
Share:

Twenty-four hours before he takes the oath of office as the 45th US president, Donald Trump arrived in Washington on Thursday, determined to transform American politics over the next four years.

The Republican billionaire’s arrival caps an extraordinary and improbable run for the White House that, once he takes the reins from President Barack Obama, will launch the United States into a new era.

“The journey begins and I will be working and fighting very hard to make it a great journey for the American people,” Trump tweeted before leaving Trump Tower, his Manhattan home.

The 70-year-old president-elect traveled aboard an official government jet to a military base near Washington with his wife Melania. The pair exited the plane and headed into the nation’s capital for a day of pre-inaugural festivities.

“It is a momentous day before a historic day,” said Vice President-elect Mike Pence, as Washington put its finishing touches on the downtown area where hundreds of thousands of Americans will congregate for Trump’s inauguration.

Trump will place a wreath at Arlington National Cemetery at 3:30 pm (2030 GMT) before crossing the Potomac River to speak at the Lincoln Memorial, the epicenter of Thursday’s events complete with a concert and fireworks.

Trump’s swearing-in, on the steps of the Capitol at noon Friday — a date and hour set by the US Constitution — will be carried live on screens around the globe. Rain is forecast.

Tens of thousands of Trump supporters — and anti-Trump protesters — have converged on the capital for the democratic ritual. Numerous dignitaries, including his unsuccessful Democratic rival for the presidency Hillary Clinton, and three former presidents will be in attendance.

Trump is “very anxious to get to the White House and get to work for the American people,” said Pence, a 57-year-old Christian conservative who rose from being governor of Indiana to become the second most powerful person in the US government.

Trump, a real estate magnate with no previous political or military experience, was elected in part for his abrasiveness: his working-class supporters have sent him to Washington to turn the page on the Obama era and upend the political status quo.

Trump has vowed to act, and swiftly.

Trump is expected to sign four or five decrees Friday, and then a raft of others beginning Monday to dismantle every policy he can without waiting for congressional approval: immigration, environment, energy and labor regulations are on the list.

He still has to finish writing his inaugural address. In December, at his Mar-a-Lago estate in Florida, he confided that he sought inspiration from John F. Kennedy and Ronald Reagan.

But spokesman Sean Spicer says the words will be Trump’s own, and last about 20 minutes, similar to Obama’s opening speech.

“It’s going to be a very personal and sincere statement about his vision for the country,” the incoming White House press secretary said as he hinted at the tone that the Republican billionaire will take.

“I think it’s going to be less of an agenda and more of a philosophical document, a vision of where he sees the country, the proper role of government, the role of citizens.”

Kennedy devoted his 1961 inaugural address to the state of the world in the midst of the Cold War, famously appealing to his countrymen: “Ask not what your country can do for you, ask what you can do for your country.”

Obama, 55, laid down a clear warning to his successor Wednesday. While he did not intend to get involved in day-to-day politics, he said he would not remain silent if certain red lines were crossed.

The Democratic opposition is organizing without Obama.

About a third of US House Democrats will boycott Friday’s ceremony. In the Senate, Democrats are putting obstacles in the path of Trump’s cabinet nominees, only a handful of whom look to be confirmed Friday.

Republicans had hoped to confirm seven on the new administration’s first day.

On Thursday, Trump named former Georgia governor Sonny Perdue to be secretary of agriculture, a move that completes his 15 cabinet selections.

With his inner circle finalized, Trump’s incoming cabinet will feature no Hispanics, the first time since Reagan.

Spicer defended Trump against charges he has the largest number of white males in his cabinet in years, describing as “second to none” Trump’s diversity in his overall political appointments.

“It’s not just about skin color and heritage,” Spicer said.

The new administration has asked over 50 individuals to remain in critical posts in order to “ensure the continuity of government,” Spicer added, including his predecessor’s special envoy to the coalition fighting the Islamic State group, Brett McGurk.