Al-Joumhouria daily  reported that the cabinet will discuss on Wednesday at the Presidential Palace  a new electoral law and that the term of the current parliament might be “technically” extended until September, when preparations for holding the elections based on a new law are complete.

President Michel Aoun who headed  up the meeting always opposed the extension of the parliament’s term. In fact he labeled the current parliament ” illegal” , before it elected him.

Aoun  started the meeting by  denouncing  the Istanbul attack and  hailing  the efforts exerted by the government in handling the situation.

Aoun also hailed the security measures of the  New Year’s Eve in maintaining peace and praised the efforts of the security forces in that regard.

Prime Minister Saad Hariri suggested the formation of a ministerial committee that sets an action plan in emergency situations, and stays in touch with the President and Prime Minister to follow up on the procedures that could be taken.

President Michel Aoun’s visit to Saudi Arabia next week is one of the items on the agenda, including the executive decrees of the oil sector, discussing a new electoral law before the constitutional deadline for the parliamentary elections approaches.

The cabinet will also discuss the appointment of Imad Kreidieh as the new OGERO Telecom chief to replace Abdul Menhem Youssef.

Aoun’s Change and Reform bloc has been after removing Youssef for several years . In fact Youssef’s removal was announced earlier today by former telecom minister Nicolas Sehnaoui  who repressed Aoun in Nagib Mikati’s cabinet  from June 2011 to  February 2014 .

Youssef also served as  director general of investment and maintenance at the telecom ministry. This position was replaced  by Bassel al-Ayoubi.

The cabinet also agreed to pay the fees of a specialized committee looking into the issue of naturalizing emigrants of Lebanese origin .

This was the Cabinet’s first session after winning the  parliament’s vote of confidence . 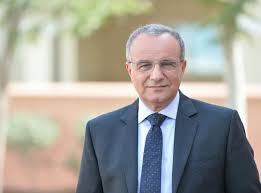 Today,  Kreidieh is leading as a CEO one of the oldest Philanthropic Association in the Middle East  (Makassed Philathropy) providing education, healthcare and other social services to a the community.