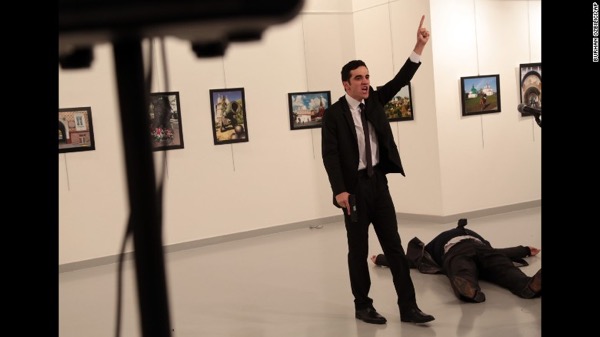 A team of Russian detectives arrived in Turkey on Tuesday to join the investigation into the slaying of Moscow’s ambassador by a Turkish police officer — an act portrayed by both countries as an effort to rupture a rapprochement between the two regional powers backing opposite sides in Syria’s civil war.

The attack Monday also touched off sweeps across Turkey as authorities hunted for clues in the life of the 22-year-old gunman, who decried the violence in Syria after pumping several bullets into the ambassador at a photo exhibit.

Russia is a key ally of Syria’s government, while Turkey has been a stalwart backer of rebel factions, although both nations have worked together on a plan to evacuate civilians and opposition fighters from their last enclave in the embattled Syrian city of Aleppo. Their partnership has effectively sidelined the United States from the diplomatic efforts to resolve the Syrian crisis, and on Tuesday in Moscow, Russia and Turkey, along with Iran, declared their intention to secure a ceasefire.

Officer Mevlut Mert Altintas gunned down Ambassador Andrei Karlov as the diplomat spoke before an exhibition of Russian photos at an art gallery in the Turkish capital of Ankara.

After killing the ambassador, Altintas, an officer with the riot police, denounced Russia’s role in the Syrian war, screaming: “Don’t forget Aleppo! Don’t forget Syria!” He was later killed in a gun battle with the police.

The assassination, which was captured in stunning detail by an Associated Press photographer and other journalists, brought into sharp relief the violent worldwide reverberations of Syria’s bloody civil war.

The ambassador’s killing has also shocked Turkey, adding to a string of recent militant attacks and political turmoil that have hurt the economy and increasingly isolated the country.

“I believe that every person who is going to Turkey should think twice before doing so, because terror attacks have been happening there on a practically daily basis,” Russian Deputy Foreign Minister Oleg Syromolotov told reporters in Moscow.

Turkey remained on edge on Tuesday, as authorities detained relatives of Altintas and searched his family home in the Soke district, in the west of the country, Turkish media reported. In what appeared to be a separate incident, a man fired shots near the entrance of the U.S. embassy in Ankara overnight. A State Department official said that no one was hurt.

Turkey’s semiofficial Anadolu News Agency said that the embassy gunman, who was identified only as Sahin S, fired several shots in the air with a pump-action rifle he had hidden under his coat early Tuesday.

He was detained and was being questioned, the news agency said. The embassy, as well as the U.S. consulates in Istanbul and Adana, were closed on Tuesday because of the shooting, according to a State Department statement.

Karlov regularly traveled around Ankara without police protection, an unusual decision given the heightened level of threat in the country since an attempted coup in July and a string of terrorist attacks by militant groups, Turkish officials said.

While the shooting probe was still in its early stages, investigators are raising the possibility of links between Altintas and a shadowy movement led by Fethullah Gulen, an exiled Turkish preacher who lives in Pennsylvania, according to a senior Turkish official.

Erdogan has accused the movement of mounting the failed coup in July, and since then, Turkish officials have frequently implicated the group in various plots to destabilize Turkey. Thousands of suspected Gulenists have been dismissed or suspended from state institutions, as part of a wide-ranging purge by Erdogan that has also swept up political opponents and journalists viewed as too critical of the government.

Gulen has denied involvement in the coup, and he released a statement on Monday condemning the killing of Karlov.

The Turkish official, who requested anonymity because he was not authorized to speak to the news media, said investigators had preliminary information suggesting that Altintas had entered a police college in 2012, after getting referrals from suspected Gulenists. Altintas also took two days off from work on the day of the attempted coup and then traveled to Ankara, the official said.

He was allowed to carry a weapon into the event with Karlov because he was carrying a police identification, officials said. There was not yet any evidence to suggest that Altintas belonged to any radical Islamic groups, such as the Islamic State or the Nusra Front, an al-Qaeda affiliated group, investigators said.

At the time of the shooting, the Turkish foreign minister was on a plane en route to Russia to take part in the meeting with his Iranian and Russian counterparts.

The Kremlin has cast the assassination as an attempt by outside forces to sunder ties between Russia and Turkey, but the meeting in the Russian capital on Tuesday served as a reminder of Russia’s growing influence in the region – at the expense of the United States.

Russia, Iran and Turkey said they were ready to help broker a Syrian peace deal after the foreign ministers and defense ministers held a series of meeting on Tuesday. The countries issued a statement, which Russian Defense Minister Sergei Shoigu called the “Moscow Declaration,” that called for an expanded ceasefire for which Russia, Turkey and Iran would act as the guarantors.

“Iran, Russia and Turkey are ready to facilitate the drafting of an agreement, which is already being negotiated, between the Syrian government and the opposition, and to become its guarantors,” the declaration said. The three countries “have invited all other countries with influence over the situation on the ground to do the same.”

Russia’s foreign minister, Sergei Lavrov, hailed the joint initiative as a way to “overcome the stagnation in efforts on the Syrian settlement,” a dig at the United States, which was absent from the Moscow meetings.

Shoigu said that Russia, Iran and Turkey were the only powers able to make a difference in Syria.

“All previous attempts by the United States and its partners to agree on coordinated actions were doomed to failure,” Shoigu said. “None of them wielded real influence over the situation on the ground.”

Putin’s involvement in Syria has significant geopolitical meaning, as a way for Moscow to project power and have a foothold in the Middle East. Putin has cast Russia as protector of legitimate leaders against the turmoil caused by rebellions, and criticized the United States and its support for Assad’s opponents.

In a further effort to cement his influence on the Syrian peace process, Putin has said he and Erdogan were trying to organize a new series of negotiations – without the involvement of the United States or the United Nations – in Astana, Kazakhstan.