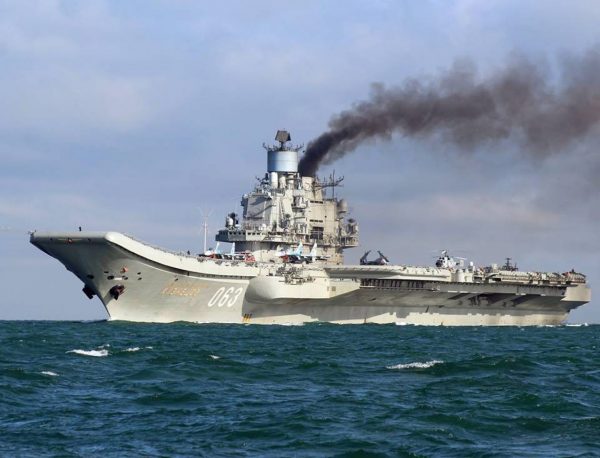 A handout photograph made available by Dover Marina.com on 21 October 2016 showing Russian aircraft carrier Admiral Kuznetsov in the English Channel, 21 October 2016. (Dover Marina.com/Handout)
Share:
By Tobin Harshaw
I’ve written before on how Russian involvement in the war in Syria is about more than just propping up the Assad regime. President Vladimir Putin has also been putting on a demonstration of military might, both to enhance Russia’s status as a resurgent power and to show off all its new hardware to prospective international buyers.

And things had been going well: Ground-based Russian planes have been flying sorties at a highly efficient pace; warships in the Caspian Sea have hit targets in northern Syria with cruise missiles; one of Russia’s new T-90 tanks survived relatively unscathed after being hit by a U.S.-made TOW missile.

But when Putin decided to send Russia’s lone aircraft carrier, the Admiral Kuznetsov, down to the Mediterranean, he blundered. First, there is no military purpose: The carrier was designed to protect home waters, not for strike missions, and with only 15 planes aboard, will do little to augment Russia’s ground-based aerial assault.

Second, the ship is simply embarrassing to look at. It lumbers along belching black smoke, accompanied by tugboats standing ready to tow because of frequent breakdowns. Its distinctive “ski jump” prow is an admission of technological defeat — because the deck lacks the catapults found on U.S. carriers, jets need the extra boost of the ramp to avoid toppling into the ocean.

In service since the mid-1980s when it was part of the Soviet navy (and called, variously, the Riga, the Leonid Brezhnev and the Tbilisi), it has made only a handful of deployments in its history, none further than the Mediterranean. According to media reports, problems with freezing pipes have reduced it to just 25 latrines for a crew of 2,000. In 2012 it broke down in the Bay of Biscay and had to be towed thousands of miles to its home port near Murmansk. It had a particularly bad year in 2009, spilling hundreds of metric tons of oil off the coast of Ireland and catching fire near Turkey, an accident in which one sailor died.

Now the Kuznetsov Curse has struck again. According to the trade website the Aviationist, on Saturday an Su-33 Flanker returning to the carrier crashed into the sea after failing to hook onto the deck-top “arrestor cables” that slow the jets upon landing. A similar thing happened last month with a Mig-29 fighter. (In both cases the pilots were able to eject before impact.)
Perhaps the Russian navy had been anticipating such problems. According to the military information service IHS Janes, the Russians have for weeks been moving planes off the flattop to an airfield in Syria.

Even without these fiascos, it’s unlikely there would be much of a market anyway if Russia decided to sell the Kuznetsov off — as it did with the former Admiral Gorshkov to India for $2.35 billion in 2004 and Ukraine did with the hull of the Varyag to China in the late 1990s. In both cases, there was a fair amount of buyer’s remorse.

The Chinese have spent hundreds of millions on repairs and new technology for a ship, now called the Liaoning, that’s more or less incapable of combat missions and really used for training. Delivery of India’s ship, now called the Vikramaditya, was delayed for years, in part because seven of its eight steam boilers failed during sea trial. It was re-commissioned in 2013 and is patrolling the Indian Ocean, although the government has decided that its new, domestically built Tejas lightweight aircraft won’t be able to land on the carrier’s small deck.

Russia continues to roll out some impressive weaponry in Syria, most recently the sophisticated S-400 air-defense system at its naval base at Tartus. This is only going to help its arms exporting business, which hit a record $15 billion last year. But, unless the purpose was to show off the effectiveness of Russian ejector seats and tugboats, the Kuznetsov should have stayed home. Or, better yet, been sent to the graveyard. It’s undoubtedly worth more as scrap metal than as a projection of Russian power.
BLOOMBERG