Hundreds of migrants die in two shipwrecks off Libya 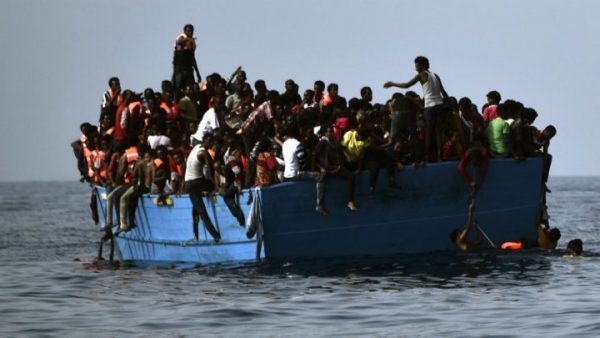 Migrants crossing the Mediterranean on November 3, 2016. AFP
Share:
At least 239 migrants, believed to be from West Africa, have died in two shipwrecks off Libya, a spokesman for the United Nations migration agency, said on Thursday.

One group of migrants, including about 20 women and six children, set off in a rubber dinghy from Libya around 3 am on Wednesday, but their boat collapsed after a few hours, said Flavio di Giacomo, a spokesman for the UN’s International Organisation for Migration, who cited accounts by survivors.

By the time rescuers arrived, most had drowned. Twelve bodies were recovered, including three babies. About 27 survived.

Another two women reported surviving a separate disaster that happened at about the same time. Their rubber dinghy was carrying about 140 people.

“A vessel with around 140 people on board overturned Wednesday just a few hours after setting off from Libya, throwing everyone into the water. Only 29 people survived,” UNHCR spokesperson Carlotta Sami told AFP.

The International Organization for Migration said the latest deaths meant 4,220 lives had been lost in the Mediterranean so far this year, compared with 3,777 in the whole of 2015.

October saw a surge in migrant arrivals in Italy, with 27,388 arriving, more than the two previous Octobers combined, and bringing this year’s total arrivals to over 158,000, di Giacomo said.

The smugglers who arrange the journeys have told migrants that European training of Libyan coastguards means the rescue missions will soon be handed over to Libya and any rescued migrants will be taken ashore in Libya rather than Italy, di Giacomo said.

That was possibly causing the rush to board boats now, he said, although the information, gleaned from rescued migrants, was not confirmed.