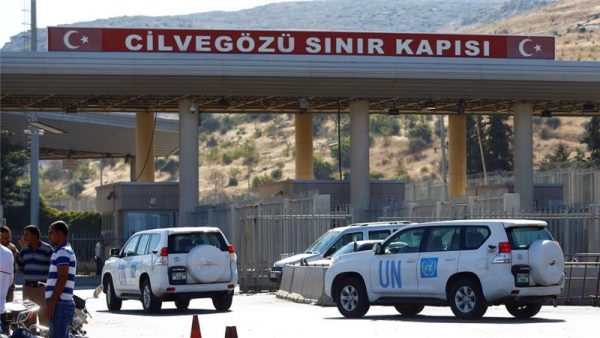 The UN has expressed frustration over stalling by the Syrian government to grant permits to allow aid into Aleppo [Reuters]
Share:
Both the United States and Russia said on Friday they wanted to extend the four-day-old ceasefire in Syria, even while an aid convoy for the city of Aleppo was stuck on the Turkish border and violence was increasingly undermining the truce.

The provision of aid to what was Syria’s largest city before the war is a critical test of the ceasefire, brokered by the former Cold War-era foes a week ago with the aim of reviving talks on ending the conflict.

The second attempt this year to halt the conflict has succeeded so far in curbing major fighting, but it remains a risky gamble in a war that has made a mockery of all previous peace efforts.

Washington and Moscow, which support opposite sides in the war between President Bashar al-Assad and insurgents, have agreed to share targeting information against jihadist fighters that are their common enemies, if the truce holds.

Although the details of the pact remain secret, that could see them wage war on the same side for the first time since World War Two. But such unprecedented cooperation would come at a time of deep mistrust between the two countries, whose relations are at their worst for decades.

On the ground, the ceasefire has been reluctantly accepted by rebels who said it was skewed in favour of Assad, but said they had no choice because of the desperate humanitarian condition of civilians in besieged areas.

Assad’s government, which holds its strongest position on the battlefield since the early days of the war, is also in no hurry to compromise.

Moscow, which holds the key to delivering the cooperation of its ally Assad, said it was ready to extend the truce by 72 hours and called on Washington to press rebels to abide by it.

Washington said it agreed that an extension was important, but also voiced alarm over the failure of aid to arrive.

Secretary of State John Kerry, who personally hammered out the agreement despite scepticism among some US administration colleagues, told Russian Foreign Minister Sergei Lavrov that Washington would not start the agreed joint targeting of militants until aid arrives.

The main dispute of the truce so far is over aid to Aleppo, Syria’s biggest city before the war, divided between rebel and government-held zones for years. Pro-government forces encircled the rebel zone this month, trapping an estimated 300,000 civilians there with no way to bring in food.

The United Nations pointed the finger at the government for holding up aid by denying letters guaranteeing access.

“In order to actually initiate the movement of these convoys we need the facilitation letters. They have not come,” UN humanitarian affairs spokesman Jens Laerke told Reuters. “It’s highly frustrating.”

After three days which saw a marked decrease in violence and no deaths, the first civilians since the start of the truce were killed on Thursday, according to the Syrian Observatory for Human Rights, a monitoring body.

Three more died and 13 were injured in air strikes in the rebel-held Idlib province on Friday, the Observatory said. A number of shells were also fired by insurgents into two besieged Shiite villages.

Clashes also hit areas east of Damascus on Friday. Residents in the city centre were woken up by a large explosion, a witness said, and shells fell near its eastern limits.

The Observatory said the violence stemmed from clashes between rebels and government forces in the Jobar district on Damascus’s eastern outskirts. Each side said the other had attacked first.

Both the warring sides accuse each other of failing to withdraw from Aleppo’s Castello Road, the main route into the rebel-held area which would be used to bring aid.

Moscow said on Friday the Syrian army had withdrawn from the road but returned its troops there after they came under fire from rebels. Insurgent groups in Aleppo said they had seen no such withdrawal from the government side, and would not pull back from their own positions until it did so.

“The regime has not withdrawn from the area,” Zakaria Malahifji of the Aleppo-based Fastaqim rebel group told Reuters.

Two aid convoys destined for Aleppo were still stuck on the Turkish border after several days, while the sides argued over how the supplies were to be delivered. The trucks contain flour for more than 150,000 people and food rations for 35,000 people for a month, a UN spokesman said.

Moscow is still talking up the agreement. Kremlin spokesman Dmitry Peskov told reporters on a conference call: “In general, we can still state that the process is moving forward, despite some setbacks.”

But a Russian defence ministry official said the situation in Syria “could get out of control” unless Washington forced the rebels to comply with the ceasefire.

“We expect decisive measures from the American side, aimed at influencing the armed groups under their control to rigorously carry out the September 9 agreement,” Lieutenant-General Viktor Poznikhir said.

Outside the scope of the truce, the United States is leading an international bombing campaign against Islamic State (IS) group fighters who control territory in both Syria and neighbouring Iraq.

The Pentagon said on Friday that the coalition had killed a senior IS group leader, Wa’il Salman al-Fayad, in an air strike near the group’s de facto Syrian capital, Raqqa.

The United States and Russia will brief United Nations Security Council members on the deal behind closed doors on Friday, diplomats said. Russia is pushing for the Security Council to adopt a draft resolution next week endorsing the deal.

Assad appears as uncompromising as ever. He vowed again this week to win back the entire country, which has been splintered into areas controlled by the state, a constellation of rebel factions, IS group jihadists and Kurdish militia fighters.

East of Aleppo, a small number of US military personnel entered the rebel-held town of al-Rai near the Turkish border on Friday as part of operations to coordinate air strikes against the IS group, a senior rebel source said. The Americans were forced to leave the area after Turkish-backed rebels protested against their presence, the source said.

One US official, speaking on condition of anonymity, said initial reports appeared to confirm the incident involving a small group of US forces.

The Pentagon did not immediately respond to requests for comment on the incident, but it acknowledged that US special operations forces are accompanying Turkish and Syrian opposition forces battling the IS group in and around the area of the Syrian border near Jarabulus and al-Rai.