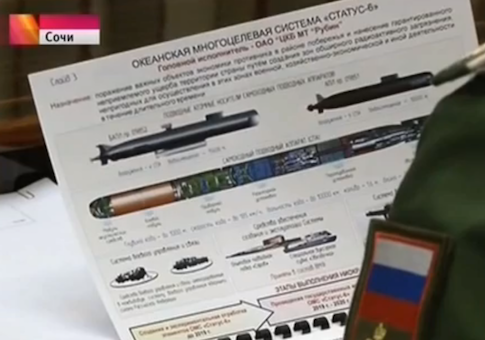 A Russian document shown on state-run television confirmed that Moscow is developing a high-speed drone submarine capable of delivering a nuclear warhead.

Disclosure of the nuclear-tipped, torpedo-shaped weapon was first reported by the Washington Free Beacon and has been dubbed Kanyon by the Pentagon.

A Kremlin spokesman confirmed Wednesday that the weapon, which Moscow is calling the Status-6 system, was inadvertently disclosed.

“Some secret information did indeed end up in front of the camera lenses, so it was later deleted,” Russian spokesman Dmitri Peskov was quoted by Interfax as saying. “We hope this won’t happen again.”

The document, first reported by the military blog Russian Forces, reveals that the drone submarine is in development.

“I don’t yet know about any measures, but in future we will, naturally, take preventative measures so that this doesn’t happen again,” Peskov said when asked whether action would be taken in response to the unauthorized disclosure.

The document revealed that the Kanyon project is called “Ocean Multipurpose System ‘Status-6” and the developer was identified as the TsKB MT Rubin design bureau, which has built all current submarines in service with the Russian navy.

According to a translation of the document the goal of developing the submarine is “damaging the important components of the adversary’s economy in a coastal area and inflicting unacceptable damage to a country’s territory by creating areas of wide radioactive contamination that would be unsuitable for military, economic, or other activity for long periods of time.”

The document describes the weapon as a “self-propelled underwater craft” that can be delivered by two classes of submarines, Project 09852 or Project 09851 boats. The 09852 is a nuclear-powered submarine based on what NATO calls the Oscar II-class attack submarine. The NATO code name for the 09851 could not be identified.

The document appears to state that the Oscar-class submarine will be capable of carrying four drones and the other will be equipped with either three or six.

Both submarines are relatively new and built in 2012 and 2014 respectively.

Information from the document also appears to say that the drone submarine will travel at a depth of 3,280 feet and at a speed of more than 56 knots.

A schematic drawing shows the drone submarine to be nuclear powered with a “reactor module.” It will be controlled by command and control ships, support ships, a non-nuclear submarine “Sarov,” and a surface ship used for rescue.

U.S. officials said several months ago that the drone submarine is expected to carry a very large megaton-class warhead that could be used to attack harbors and coastal regions.

“This is an unmanned sub that will have a high-speed and long-distance capability,” said one official, who noted that the drone development is years away from a prototype and testing.

The Kanyon drone submarine is said to be a major worry of the U.S. Navy, which is in charge of conducting anti-submarine warfare.

Mark Schneider, a former Pentagon official, said the document appears to be an accidental disclosure that confirms the Free Beacon report that the weapon is designed to attack coastal cities.

“The speed and depth of the drone would be massively in excess of the speed and depth capability of any U.S. submarine as described by the Navy in unclassified publication or, indeed, any manned submarine in world,” said Schneider, a nuclear weapons specialist.

“A drone with these characteristics would essentially be invulnerable to interception,” he added. “This is alarming in light of the translation of the mission of the drone” to disrupting an adversary’s economy by causing massive radioactive contamination for long periods, Schneider said.

“The weapon appears to be an intentional violation of humanitarian international law if it was used,” he noted.

Pavel Podvig, who writes the Russian Forces blog, said he is unsure whether the disclosure is a security lapse or intentional.

The removal of the video from news organizations supports the notion the disclosure was a mistake.

The weapon “appears to be more or less the system” first disclosed by the Free Beacon, Podvig wrote.

“So, maybe Moscow decided that the leak would not be such a big deal,” he wrote. “Still, they would have probably preferred to keep some details out of it.

Podvig said the weapon appears to be a radiological weapon or “dirty bomb,” although delivery of a large nuclear warhead is not ruled out.

“Of course, the disclosure could have been deliberate—without knowing [the weapon exists] there is no deterrence,” he said.

Putin announced at a meeting of his national security advisers that Russia is building weapons to penetrate missile shields, such as the U.S. missile defense system.

Moscow insists that U.S. missile defenses in Europe are aimed at countering Russian strategic missiles despite repeated statements that the defenses are not capable of stopping those strategic weapons.

Ground based interceptors in Alaska and California also are limited in number and capability and aimed primarily at North Korean long-range missiles and future Iranian missiles.

Putin repeated his view that U.S. assertions that its missile defenses are aimed at North Korea and Iran “only cover up [their] true plans.

“Their true aim is to neutralize the strategic nuclear potential of other nuclear countries … especially our country,” Putin said.

Russia is building up its nuclear forces and updated its nuclear doctrine to lower the threshold for the use of such weapons in a conflict.

The buildup and doctrine have alarmed U.S. and NATO military leaders who have said that Russia is emerging as a renewed strategic threat under Putin, a former KGB officer who has said the collapse of the Soviet Union was a catastrophe.