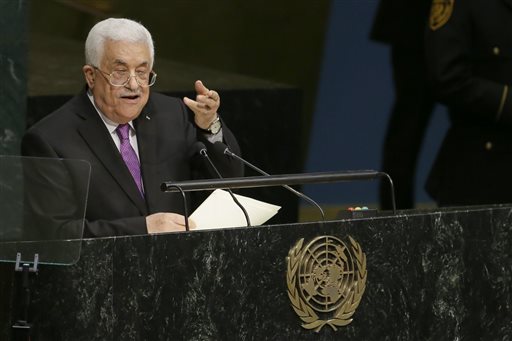 Mahmoud Abbas, President of the State of Palestine, addresses the 70th session of the United Nations General Assembly, at U.N. Headquarters, Sept. 30, 2015. (AP Photo/Mary Altaffer)
Share:
Palestinian President Mahmoud Abbas told world leaders Wednesday that he is no longer bound by agreements that have defined relations with Israel for the past two decades and are meant to form the basis for a two-state solution to the Middle East conflict.

But what sounded like a potentially explosive declaration was blunted by the lack of any detail on how he plans to move forward.

Addressing the United Nations General Assembly, Abbas said Israel had repeatedly violated its commitments, most notably by expanding settlements in the West Bank and east Jerusalem, on lands the Palestinians seek for a future state.

Abbas’ speech reflected growing Palestinian frustration and appeared aimed at focusing the attention of the international community — busy with the Syrian civil war and the migrants’ crisis in Europe — on the long-festering Israeli-Palestinian conflict.

However, the Palestinian leader stopped short of specific threats that would irrevocably put him on a collision course with Israel, such as suspending security cooperation. Instead, he closed on a conciliatory note, saying that eventual peace between Israelis and Palestinians is “in the interest of our future generations.”

Israeli Prime Minister Benjamin Netanyahu’s office issued a statement in response, saying that Abbas had delivered a “speech of lies that encourages incitement and unrest in the Middle East.”

Netanyahu called on Abbas to “act responsibly” and answer his proposal for direct negotiations with Israel without any preconditions. “The fact that time after time he (Abbas) does not respond is the best proof that he has no intention of reaching a peace agreement,” he said.

No serious talks have been held since Netanyahu came to power in 2009. Abbas says he will not return to negotiations without a settlement freeze and an Israeli recognition of the pre-1967 frontier as the basis for border talks. Unlike some of his predecessors, Netanyahu has refused to accept the 1967 line as a starting point.

Abbas said Wednesday that Israel has repeatedly violated its commitments, including by expanding settlements, and called on the U.N. to provide international protection for the Palestinians.

The Palestinians “will not remain the only ones committed to the implementation of these agreements, while Israel continuously violates them,” Abbas said. “We therefore declare that we cannot continue to be bound by these agreements and that Israel must assume all of its responsibilities as an occupying power.”

Israel’s actions “render us an authority without real powers,” he said.

If Abbas were to go through with his demand that Israel assume responsibility for the Palestinians as the occupying power in the territories, this arguably would require dissolving the Palestinian Authority and Abbas’ resignation. He didn’t mention any of this in his speech.

He also made no specific mention of security coordination between his forces and the Israeli military in cracking down on a common foe, the Islamic militant Hamas.

“This is a threat not a plan,” he said, speaking in Ramallah. “Abbas has no plan, otherwise he could have spelled it out in his speech.”

With Israeli-Palestinian negotiations frozen, Abbas has failed to come up with a political alternative and in his address, he seemed to be asking for a new international process because the bilateral one is not working and has stalled.

“It is no longer useful to waste time in negotiations for the sake of negotiations; what is required is to mobilize international efforts to oversee an end to the occupation in line with the resolutions of international legitimacy,” he said.

Thousands of Abbas supporters gathered in the city centers of several West Bank cities as they listened to Abbas’ speech. They cheered when he said he is no longer bound by the signed agreements with Israel, waving Palestinian flags.

In a symbolic moment Wednesday, Abbas raised the flag of Palestine at the United Nations for the first time, with a promise that it will be raised soon in Jerusalem, “the capital of our Palestinian state.”

More than 300 ministers, diplomats and well-wishers crowded into the rose garden at U.N. headquarters where a flagpole had been erected for the ceremony, which took place following Abbas’ speech.The Palestinians campaigned for a General Assembly resolution, overwhelmingly approved Sept. 10, permitting U.N. observer states to fly their flags alongside those of the 193 U.N. member states. The Holy See and the Palestinians and are the only two U.N. observer states.

Abbas’ U.N. remarks come at a time when the 80-year-old Palestinian leader appears to be losing the backing of the Palestinian public. A poll last week indicated that two-thirds want him to resign and that a majority no longer believe negotiations with Israel and a two-state solution are realistic.

U.S. Secretary of State John Kerry said later Wednesday that an Israeli-Palestinian peace agreement is “not an impossible dream” and can be achieved despite recent setbacks and tensions over holy sites in Jerusalem. He spoke to a meeting of donors to Palestinian development projects.