Russia, Iran step up coordination on defense of Assad regime in Syria

Russia and Iran have stepped up coordination inside Syria as they move to safeguard President Bashar al-Assad’s control over his coastal stronghold, according to officials in the U.S. and Middle East, creating a new complication for Washington’s diplomatic goals.

Senior Russian and Iranian diplomats, generals and strategists have held a string of high-level talks in Moscow in recent months to discuss Mr. Assad’s defense and the Kremlin’s military buildup in Syria, according to these officials.

Much of the activity from both sides in recent months has been concentrated in the coastal region of Latakia, the base of Mr. Assad’s family and his Alawite sect, which has come under pressure from rebel forces to the north, threatening to cut it off from the capital Damascus.

Coordinating efforts cited by the U.S. and Middle East officials included a secret visit in late July by the commander of Iran’s elite overseas military unit, the Qods Force. Maj. Gen. Qasem Soleimani directs Tehran’s military and intelligence support for the Assad regime and is one of the most powerful leaders of the Islamic Revolutionary Guard Corps, or IRGC.

Such visits “all come within the framework of this coordination,” Syrian Foreign MinisterWalid al-Moallem told state media last week, referring specifically to the trip by Mr. Zarif and a deputy. “There is deep coordination on all levels between us and Moscow, and between us and Tehran, and I can say to whomever wants…they can join too.”

U.S. officials said they haven’t unraveled the full extent of the cooperation or its intention. “We assume [the Russian buildup in Syria is] being coordinated with the Iranians,” said a senior U.S. official, who said the U.S. tracked Gen. Soleimani’s trip to Moscow.

IRGC military advisers and soldiers are also deployed in Latakia, as well as soldiers from Tehran’s close political and military ally, the Lebanese militia Hezbollah, they said.

A U.S. defense official said the Pentagon believes Gen. Soleimani’s trip to Moscow was “very important” in relation to the Russian buildup in Latakia. “What we are seeing now is the manifestation of that meeting, and that there is some sort of Iran nexus,” the official said.

The coordinated Iranian and Russian support for Mr. Assad poses a formidable obstacle to the diplomatic aims of the Obama administration, which wants to remove the Syrian dictator from power.

As support from Moscow and Tehran pours into Syria, the U.S. has moderated its demands that Mr. Assad step down before a transition takes place. 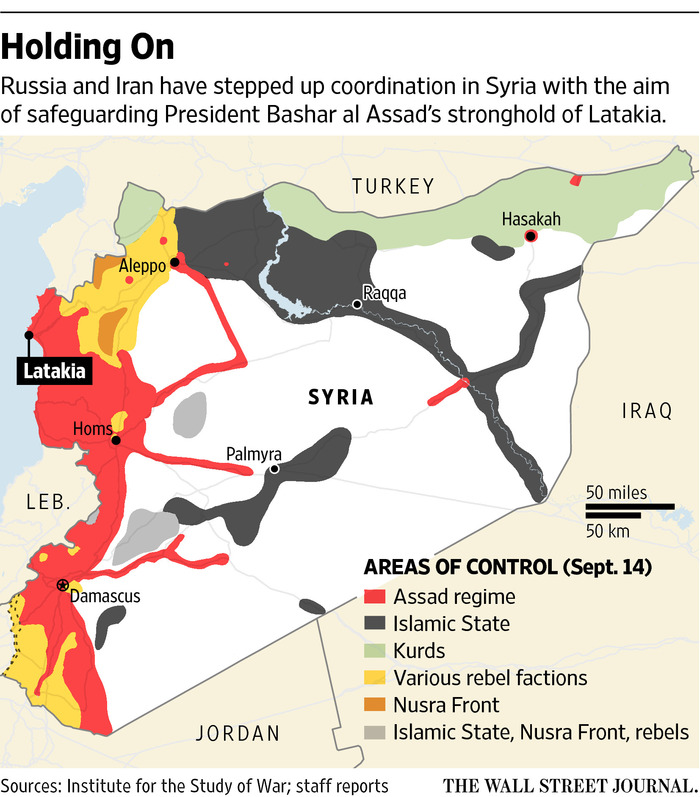 Secretary of State John Kerry said last weekend that Mr. Assad may be able to remain as part of a transition to a new government.

On Monday, Israeli Prime Minister Benjamin Netanyahu told Russian President Vladimir Putin in Moscow that his government is concerned that Iran and its allies could beseeking to open a new military front against Israel from within Syrian territory.

Following talks at Mr. Putin’s home outside Moscow, Mr. Netanyahu said on Israel Radio that they had agreed on coordinated measures to prevent miscalculations that could trigger a wider war, but didn’t elaborate.

Mr. Putin seemed to play down the threat to Israel. “We know that the Syrian army and Syria as a whole are in no condition to open a second front,” he said, according to a Kremlin transcript.

Senior U.S. and European officials said that while they suspect there is significant cooperation between Moscow and Tehran, their long-term interests could diverge.

Mr. Putin, they said, appears to be using the Syria conflict to try to increase the Kremlin’s influence in the Middle East and in the international diplomacy focused on finding a post-Assad government.

Tehran, meanwhile, wants to maintain Syria’s coastal region and the areas adjacent to the Lebanese border as the key supply route for arms going into Lebanon and Palestinian militant groups.

“For Iran, Assad is a guarantee for the survival of Hezbollah,” said Fawaz Gerges,professor of international relations at the London School of Economics and Political Science.

For his part, Mr. Putin seems fixated on maintaining a Moscow-friendly government in Damascus that will green light a continued Russian military presence and large arms purchases, said Emile Hokayem, a Syria analyst at London’s International Institute for Strategic Studies.

Russia and Iran have staunchly supported Mr. Assad since the uprising began in Syria in early 2011.

Russian personnel have been seen transiting through the airport since 2014. Hezbollah and IRGC commanders have been based in the coastal hotels.

But over the past three months, Moscow and Tehran have appeared to be preparing to bolster the region’s defenses, according to Syria analysts and Arab officials.

Syrian rebel forces have made substantial territorial gains in the northern province of Idlib during this time and have been pressing down into Latakia. Further victories by the insurgents could cut off Damascus from Mr. Assad’s home base, they said.

Gen. Soleimani visited a front line battlefield north of Latakia in June that was adjacent to the Turkish border and Idlib, according to Arab media reports.

There he said Iranian and Syrian leaders were jointly planning an operation that would “surprise the world.”

Weeks later, Gen. Soleimani visited Moscow and met with Defense Minister Sergei Shoygu and the heads of Russian military intelligence and defense industries, according to U.S. and European officials.

The U.S. and other Western governments are closely watching for what actions Russia, Iran and the Syrian regime take now.

One possibility, said analysts, is an operation around the ancient city of Palmyra to target Islamic State militants. Mr. Putin has described the Russian presence in Syria as a counterterrorism operation, and he is scheduled to address the U.N. General Assembly in New York on Sept. 28. He could cite Palmyra to back his claims.

Syrian warplanes have intensified airstrikes against Islamic State in Palmyra in recent days, according to opposition activists monitoring the conflict as well as Syrian state media.

Another target could be al Qaeda-linked Nusra Front in Idlib province. The militia and its allies control almost the entire northwestern province with the exception of two Shiite villages, where Hezbollah and other Iranian-trained militias are deployed.

“The first major operation will tell us what their intentions are,” said Elias Farhat, a retired Lebanese army general and military strategist, referring to Iran and Russia.

He said evidence from the ground indicates the Russians, Iranians and Hezbollah are establishing a joint-operational command center in Latakia, near the airport.

The increasing Russian-Iranian defense of Mr. Assad is placing the Obama administration in a diplomatic and strategic bind.

U.S. officials had said they hoped the landmark nuclear agreement forged in July between Washington and Tehran, with the assistance of Russia, could pave the way for cooperation in ending Syria’s civil war. They specifically raised hope that a new diplomatic process could start to ease Mr. Assad from power.

Mr. Kerry and other U.S. officials have voiced concerns in recent days that Russia’s deployment could further destabilize Syria and place Moscow’s troops in conflict with a U.S.-led air campaign. But Mr. Kerry also has indicated that the U.S. remains interested in joining with Russia in combating Islamic State.

A Syrian army officer who has defected and who is in contact with the Russians said the Kremlin’s buildup could open the way for a diplomatic solution in Syria, but on Mr. Putin’s terms. He said the Russians know Mr. Assad won’t survive long term, and that the Kremlin is staking its claim to negotiate with the Americans.

“It is like having a broken vase that you want to sell. You have to glue it together and then try to sell it,” said the exiled former general.