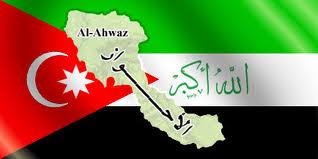 The flag of Ahwaz
Share:
Colonel Rahman Mousavi, a provincial deputy police chief, said three Iranian officers were killed when unknown gunmen opened fire on a temporary police station at a park in the city of Hamidiyeh, about 25 kilometers (15 miles) west of the city of Ahvaz, the provincial capital of Khuzestan at around 3:00 a.m. local time Thursday , state owned Iranian news website Press TV reported on Friday

The police officers were reportedly on duty at the makeshift station set up for the Nowruz holidays when they came under the attack.

Mousavi said an investigation has been launched into the attack to identify and arrest the perpetrators.

The city of Hamidiyeh witnessed huge protests in April 2011 resulting in the killing of a protester by the Iranian Revolutionary Guard . Eyewitnesses said that a large number of wounded were taken to homes and their relatives refused to transfer them to hospitals for fear of arrest.

Similarly, The Iranian Revolutionary Guard forces fired on demonstrators in the city of Ahwaz killing three and injuring many others. This came in response to the peaceful protests which swept the Arab region in what was called as the “day of rage in Ahwaz”. It was declared to protest what the organizers called the oppression against the Arabs in that province.

The Ahwazi ( Ahvazi) Arabs are the predominant majority in the Khuzestan province of southwestern Iran with major cities such as Ahwaz , Abadan and Khoramshahr.

There are reportedly five million Arabs struggling to survive under the Persian rule in an Arab region bordering Iraq and the Arabian Gulf . Once an autonomous area, separated from Persia by the Zagros mountain range, under the governance of Sheikh Khazaal bin Jabber whose family had ruled for over a century, it was seized by Shah Reza Pahlavi in 1925 with a nod and a wink from Britain eager to preserve its relationship with Iran due to its oil interests.

Formerly known as Arabistan, the Iranian occupiers wasted no time in changing the name of this new Iranian province to Khuzestan, rejected by its Arab residents even today. Arabs and Persians have little in common and as Sir Arnold Wilson, a British colonial administrator, once said: Arabistan is “a country as different from Persia as is Spain from Germany.”

Iran’s policy of ethnic discrimination combined with its Persian resettlement endeavors resulted in turning the Ahwazi Arabs into an economic and social underclass.

Numerous Arab villages are without schools and those ‘lucky’ enough to attend school are educated in Farsi. Some 80 percent of Ahwazi Arab women are illiterate as opposed to 50 percent of Ahwazi men. Over thirty percent of the under-30s are unemployed in this heavily industrialized region, primarily because Persians receive priority and jobs often advertised outside the governorate .

Thousands are without access to drinking water, because rivers have been diverted to arid Persian provinces. Many are deprived of electricity and gas. In 2013 Ahwaz, was classed by the World Health Organization (WHO) as the most polluted city on earth partly due to desertification and industrial smog. Arab farmers are regularly stripped of agricultural land and although there has been loud international condemnation of Israel’s separation walls, there have been no media headlines about the segregation walls hiding squalid Arab ghettoes from wealthier Persian settlements and glossy new towns.

According to observers it is no wonder that Ahwazi Arabs are now driven to protest against such blatant discrimination. According to the Ahwaz Studies Center, “increasing joblessness and rising poverty is creating a humanitarian crisis among Ahwazi Arabs that threatens to lead to widespread unrest…” The authorities use a heavy hand against demonstrators and rights activists.

The Iranian authorities were alerted when Ahwazis referred to the Saudi players as “their Arab Brothers” and welcomed them to “Arab lands”. The forces attempted to move the Arabs away from the cameras, provoking resistance. The crowd responded by destroying posters of Iran’s Supreme rule Ayatollah Ali Khamenei. This resulted in several arrests . The protesters were heard in a video as saying “Iran will never be able to smother our voice and our Arab identity.”