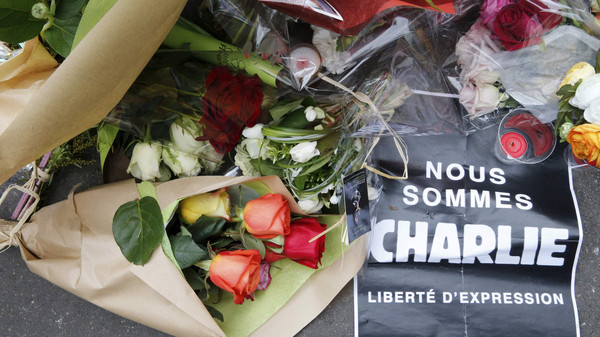 A sign which reads in French,”We are Charlie. Freedom of Expression” is placed on flowers as people continue to pay tribute to the shooting victims in front of the offices of the weekly satirical newspaper Charlie Hebdo in Paris January 10, 2015. REUTERS/Pascal Rossignol
Share:

Palestinian President Mahmoud Abbas and Israeli Prime Minister Benjamin Netanyahu  and the  Jordanian King  Abduallah II and Queen Rania   will be attending a mass national rally for the 17 victims killed in Islamist attacks in France this week, Agence France-Presse reported.

Leaders from around the world will also join the march in solidarity. Here is a list of world political figures who have confirmed their attendance:

Preparations for the rally

The rally Sunday is also a huge security challenge for a nation on alert for more violence, after 17 people and three gunmen were killed over three days of attacks on a satirical newspaper, a kosher supermarket and on police that has shaken France.

More than 2,000 police are being deployed, the Associated Press reported in addition to tens of thousands already guarding synagogues, mosques, schools and other sites around France.

Unity against extremism is the overriding message for Sunday’s rally.

The rally “must show the power, the dignity of the French people who will be shouting out of love of freedom and tolerance,” Prime Minister Manuel Valls said Saturday.

Al-Qaeda’s branch in Yemen said it directed Wednesday’s attack against the publication Charlie Hebdo to avenge the honor of the Prophet Muhammad, a frequent target of the weekly’s satire.