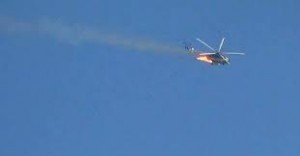 Syrian rebels say a former army missile specialist in their ranks used captured shoulder-launched weapons to down two government aircraft in as many days last month.

Rebel commanders said that the army helicopter shot down on November 27 and the fighter jet shot down the following day were both hit with Russian-made surface-to-air missiles captured from an army base west of Syria’s second city Aleppo in mid-November.

Defence analysts cited by the Western media had said that the aircraft were likely brought down with surface-to-air missiles provided from abroad, including by the Gulf state of Qatar, an outspoken champion of arming the rebels, over the opposition of the United States.

The rebels said the expertise to use the SA-16 Gimlet missiles, which they said they captured from Base 46 along with other heavy weaponry, came from within their own ranks in the form of a former army missile specialist. 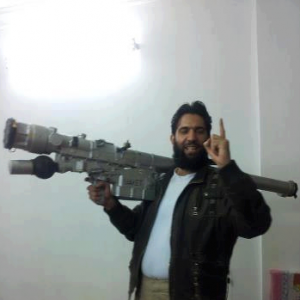 “This is Musa Abu Omar. He shot down both of the aircraft,” said Abu Abdel Rahman, a leading rebel commander in the town of Darret Ezza, 30 kilometres (20 miles) northwest of Aleppo, as he introduced the fighter to AFP.

“Both the missiles came from Base 46,” Abu Omar said. “We’ve got enough of them now to bring down the whole Syrian air force,” he boasted, refusing to give any specific numbers.

Asked where he got his training on the use of the SA-16, a missile most famous for its use by Saddam Hussein’s forces against coalition aircraft during the 1991 Gulf war, Abu Omar said: “It was my specialization in the army during my three year service.”

The 27-year-old showed AFP a photograph of himself holding a shoulder-launched missile that he said was one of the two he fired. The picture’s authenticity could not be independently verified.

Abu Omar said instruction was now being given to other rebel fighters.

“We’ll impose our own no-fly zone without any need from help from foreign governments,” he added in reference to the repeated refusals of Western governments to heed opposition calls to intervene to close the skies to President Bashar al-Assad’s warplanes as they did in Libya last year.

Abu Omar recalled how on November 27 the rebels received intelligence that a government helicopter was due to carry out a resupply mission to the massive Sheikh Suleiman base, near Darret Ezza, which has been under rebel siege for months.

“Our information was that it would resupply the base, then return to Aleppo with some generals and other senior officer. So we laid in wait and I fired when the aircraft took off again,” Abu Omar told AFP in an interview.

“We knew that the regime would attempt to retaliate the following the day… so we laid a new ambush,” the 27-year-old said.

The rebels’ acquisition of surface-to-air missiles poses a significant threat to the government’s increasing reliance on its air power in its war against the rebels, particularly in their stronghold in the northwest.

“It’s a turning point,” said Riad Kahwaji of the Institute for Near East and Gulf Military Analysis (INEGMA) told AFP after the two aircraft were downed.

But there have been contradictory reports about the likely source of the missiles with the Washington Post reporting on Thursday that they were likely part of a consignment of up to 40 supplied from abroad.

Some of the missiles were supplied by Qatar, the newspaper reported, citing two Middle Eastern intelligence officials it did not identify.

“It should be worrying to everyone,” one of the officials said. “When Assad is finished, terrorists could end up with these, and commercial flights would be at risk.”

Washington has consistently opposed providing SAMs to the rebels for fear they could fall into the wrong hands.