Russia can finally see that Putin’s ‘days are numbered’ 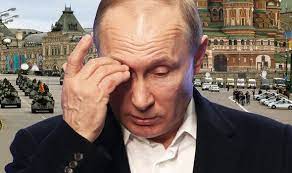 The war in Ukraine has destroyed Putin’s aura of infallibility back home and even the Kremlin seems to have realized this is the beginning of the end.
Share:

The war in Ukraine has destroyed Putin’s aura of infallibility back home and even the Kremlin seems to have realized this is the beginning of the end.

More than two decades after he came to power, President Putin’s grip on the Russian people is finally starting to falter.

The war in Ukraine has opened up a credibility gap, and for the first time many Russians no longer feel they can trust what their leader is saying to them. Combined with tough economic sanctions, funds being re-allocated to the war, and conscription drives across the country, the costs of this vainglorious conquest are becoming more and more difficult to take.

Even loyal Russians have plenty of questions for Putin right now. And the Kremlin is running out of ways to cope with the pressure. In the past, a scripted appearance, or a half-naked staged photoshoot would be enough to get the domestic media back on side. Sometimes, they even gave independent reporters a chance to ask Putin one or two sensitive questions—which he would quickly and vigorously dismiss.

But every recent attempt to make Putin look like a strong and decisive leader has failed so badly—even inside Russia—that after nine months of devastating war in Ukraine, the Kremlin is running out of ideas. They even canceled Putin’s big annual press conference for the first time in years.

“Russia, just like any other nation, wants to live a stable life without feeling ashamed of our Moscow leadership. Before the war Putin guaranteed us a stable life but now he tells us that life in Russia will be good only in ten years,” Vera Aleksandrovna, 57, a lawyer from Saint Petersburg, told The Daily Beast. “I liked Putin before the war, my son was an IT tech, we liked the IT opportunities in Russia; but now all the brain and talent is escaping the country, my son is gone too and I cannot afford to wait for ten more years for a good life.”

Russian chess grandmaster, Garry Kasparov, an outspoken critic of the Kremlin, told The Daily Beast that we are already entering the endgame for Putin. “Russia has obviously lost the war, which will lead to the collapse of the regime but the question is how many more people will die before that happens,” he told The Daily Beast.

“Putin has never played chess, the game of rules, he played a poker game,” Kasparov said. “Putin is absolute evil, he has gone insane after 22 years in power; but in his bones he must understand that he cannot go on ruling Russia, when the war ends and dozens of thousands of angry soldiers return home with arms, feeling robbed.”

“Putin is falling apart,” she told The Daily Beast. “He is clearly lying right in front of the cameras—with no confidence in his voice.”

Yashina had particular reason to pay attention to Putin’s state of mind because her son was sentenced to eight and a half years in prison last Friday, but the way the president has handled the fallout of his unpopular incarceration—for telling the truth about the war in Ukraine—has broken through to the wider population.

Putin’s contortions are no longer convincing his domestic audience.

Hundreds of independent Russian and foreign journalists have left Russia during the past nine months but some of those remaining, including BBC journalists, continue to spread the word about a commander-in-chief who is losing thousands of his soldiers, as well as some of the key territories in Ukraine. Last week BBC’s Russian service and the local publication, Mediazona, confirmed the names of 10,002 Russian soldiers killed in Ukraine. The real Russian death toll “may exceed 20,000 and the total number of irretrievable losses could be as high as 90,000,” the BBC said.

Both independent and Kremlin-controlled polls show that Putin has lost support for his war, with less than 30 percent of the country wanting it to continue. “Putin could have ruled longer, if he did not start this war but now his days are really numbered, he is falling apart and he is clearly aware of it,” Yulia Galiamina, a Moscow-based opposition politician, told The Daily Beast. Galiamina has been a victim of police violence, and has been under arrest multiple times but she refuses to leave Russia, instead she is encouraging more people to stand up against Putin.

Galiamina leads a movement of more than 150 Russian women called Soft Power. “Most of our women are mothers, who see the problems from the point of view of our children’s future without Putin, in Russia, that is eventually going to be free.” Galiamina and Soft Power activists have been collecting signatures of people speaking against Putin’s mobilization of Russians. “We have collected more than 500,000 signatures that we are going to send to the Kremlin, we understand our collective responsibility,” she added.

Putin is still backed by around 79 percent of Russians according to recent polls but that faith is weakening. Studies by Levada, an independent Russian think tank, show the number of Russians who believe their country is moving in the right direction has already decreased from 64 percent in October to 61 percent in November.

Every Kremlin attempt to rebuild the image of Putin as superman seems to provoke another avalanche of jokes online.

Putin recorded one of his on-location Action Man clips earlier this month showing him driving over the bomb-damaged bridge to Crimea. It was supposed to show how fit and healthy he still is at the age of 70 but online commenters were more obsessed with the car he was driving. It was not one of the Russian-made Ladas he has previously promoted—which motorists curse for “breaking down more often than even the cheapest foreign brands”—but a German-engineered Mercedes.

Kremlin spokesman Dmitry Peskov was forced to go on the record explaining that the Mercedes just happened to be on hand, and it was no indication of Putin’s vehicular preferences.

More damagingly, his jaunt into internationally recognized Ukrainian territory, now annexed by Russia, came in the same week that three explosions struck strategic airfields inside the motherland, one of them just 150 miles from Moscow. The drone attacks made Russian air defenses and the commander-in-chief look pathetic, even in the domestic media.

Last week, the Kremlin published an image of Putin with a glass of champagne in his hand, and that immediately gave rise to many anecdotes about “drunk Putin.”

The prevailing mood is becoming very hard for the Kremlin to navigate.

“The Kremlin canceling Putin’s big press conference is a sign: they realize how hopeless their situation is—this is a dead end, his plan has failed in Ukraine,” well-known Kremlin observer Olga Bychkova told The Daily Beast. “They are still standing by him, since without Putin they are finished; but now they are even unable to write a script, think of questions and answers for him.”

The latest debate between Putin’s critics is whether the catastrophe in Ukraine is the fault of one man or all of Russian society. Mikhail Khodorkovsky, a former oligarch turned prisoner now exiled in London, suggested to Radio Liberty last week that—while Putin took the whole country with him during the annexation of Crimea in 2014—he is now on his own. “The war of 2020 is purely Putin’s invention; Russian society had a shock on Feb. 23,” he said.

The question now is how much worse is the situation going to get?

Kasparov, an ally of Khodorkovsky, thinks there is now also an opportunity for the U.S. to drive a wedge between the president and his senior lieutenants, like Nikolai Patrushev, secretary of the Kremlin’s security council. He says the U.S. must spell out what would happen if they did ever allow Putin to press the nuclear button. Kasparov said he hoped CIA director William Burns “whispered something into Patrushev’s ear,” at the meeting between the security chiefs in Moscow last month.

After years of adulation across the country, Putin is becoming more isolated by the day