Army chief heads to Qatar, will he return as Lebanon’s new president 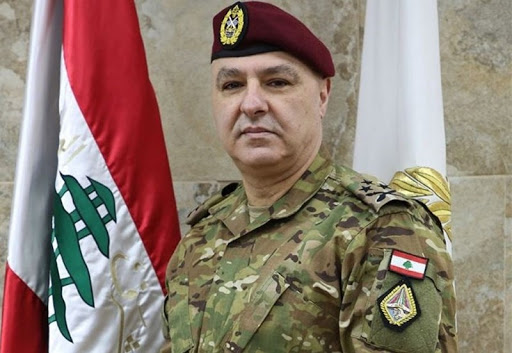 Lebanese army chief Gen. Joseph Aoun who has reportedly been discussed as a possible consensus presidential candidate headed to Qatar

Though his name has not yet appeared on the ballot, Qatar has reportedly been active in promoting him as the candidate who “enjoys the support of most political parties in Lebanon, does not represent a provocation to anyone, and is accepted regionally and internationally,” according to Lebanese media reports .

Ad Diyar also reported that according to its sources the Qatar leaders and French president Emmanuel Macron are also negotiating the issue with Iran , reportedly to convince its proxy Hezbollah which has been obstructing the parliamentary election of the president .

Who are the candidates?

Under Lebanon’s power-sharing system since its independence from France in 1943, a president has to be a the Maronite Christian ; the prime minister a Sunni and the parliament speaker a Shiite.

While Hezbollah has yet to publicly name a candidate, public perception is that the group backs Suleiman Frangieh, a close ally of the party and of Syrian President Bashar Assad. The nominal candidate of the camp opposing Hezbollah is parliamentarian Michel Moawad. Both candidates come from established political families.

Moawad has received more votes than any other candidate, but has failed to garner a majority . Gen. Joseph Aoun has reportedly been discussed as a possible consensus candidate, though his name has not yet appeared on the ballot.

Parliamentarian Gebran Bassil, the son-in-law of President Aoun, the head of the Free Patriotic Movement party, and an ally of Hezbollah, has long been seen as Aoun’s successor of choice. Though he appears out of the running due to very limited popular support . He and his party have not yet endorsed any candidate and ruled out any support for the army chief or Frangieh.

With no developments to break the impasse, most experts say that political blocs will focus on trying to extract maximum political concessions, including divvying up the appointment of ministerial and senior government posts.

A Western diplomat who had met with most of Lebanon’s political blocs told The Associated Press that they are playing a “waiting game.”

One observer told the Associated Press that he likens the current deadlock to a game of poker. “You keep your cards hidden, you don’t blink or flinch, and wait until the side breaks down,” he explained. “Everyone is maneuvering at this point, either showing up with a blank ballot or choosing a candidate who isn’t viable.”

Moawad has slammed Hezbollah and its allies’ for ruining ties with the Gulf and the wider international community, and at a discussion panel said would prefer paralysis over a new president affiliated to them.

“We’re seeing a repeat of the past where Hezbollah and allies gives Lebanon two choices: either accept their candidate or have a presidential vacuum,” said Charles Jabbour, a spokesman for the Lebanese Forces party, a Moawad ally.

According to observers the  Lebanese parliament showed its complete irresponsibility by not taking seriously the election of a new president and  is therefore not up to the task and must be awaiting instructions of the neighboring countries before they cast their votes .

For the first time, and after eight parliamentary sessions, the number of blank ballots cast by Hezbollah and its allies was equal to the number of votes received by Mouawad.

This tie came against the backdrop of the dispute that arose between Hezbollah and its Christian ally in Lebanon, the Free Patriotic Movement, since the Cabinet session last Monday ( which was opposed by FPM) .

The parliament again failed to hold a second round for loss of quorum after the withdrawal of Hezbollah, the Amal Movement and MPs and their allies from other blocs.

The question on the mind of many observers is : Will the Army chief return as the new president ?

Only time will tell.