FIFA Qatar: For Iranians, this World Cup is about more than football 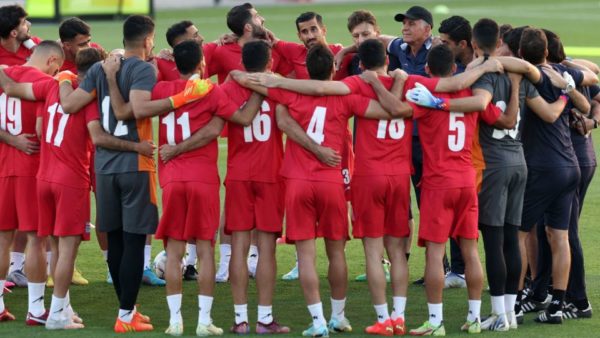 The entire Iranian team refused to sing their country’s national anthem before their opening World Cup game against England in a powerful statement against the country’s regime.
Share:

For the last few months, soccer in Iran has witnessed small acts of defiance against the country’s regime amid widespread protests in the country; Sardar Azmoun’s refusal to celebrate scoring an equalizer against Senegal and several players changing their social media profile pictures to black.

Soccer, like everything else in Iran, has been affected by the protests, chaos and violence convulsing the country and threatening the very nature of the regime that has been in power for more than 40 years.

It is amid this turmoil the Iranian national team has traveled to Qatar where it will face two of the country’s fiercest geopolitical rivals, England and the US, in its group – the ‘Old Fox’ and the ‘Great Satan’ as they are referred to colloquially by some in Iran.

“How can this team go and perform when you’re supposed to be a national team, a representative of the people?” Peyvand Mossavat, an Iranian-born Canadian former soccer player and now coach, told CNN Sport.

In the buildup to the World Cup in Qatar, there were calls for Iran to be thrown out of the tournament. As the team prepares to play England for its opening World Cup match on 21 November, all eyes will be on its players for more than soccer.

The protests, referred to by experts as the most significant since the establishment of clerical rule following the 1979 Iranian Revolution, were sparked by the death of Mahsa Amini,a 22-year-old woman who died after being detained by Iran’s morality police allegedly for not abiding by the country’s conservative dress code.

What began as a clamor for women’s rights has morphed into a movement, still driven by women, demanding the end of a regime that “people no longer believe…is reformable,” Abbas Milani, director of Iranian studies at Stanford University, told CNN’s Christiane Amanpour earlier this month. “They want a different social contract without the clergy claiming divine right.”

Iranian security forces have unleashed a violent response, killing at least 378 people, the Norway-based Iran Human Rights NGO (IHRNGO) group has claimed, while a UN official says as many as 14,000 people have been arrested across the country, including journalists, activists, lawyers and educators.

CNN cannot independently verify these figures as non-state media, the internet, and protest movements in Iran have all been suppressed. Death tolls vary by opposition groups, international rights organizations and journalists tracking the ongoing protests.

‘The number one sport’

Football is the “number one sport” in Iran, Iranian-born Canadian coach Mossavat says, giving the team a potentially powerful platform from which to voice its support for the protestors.

In the past, the national team had been seen as more representative of the Iranian people than the regime, Omid Namazi – Iranian national team’s assistant coach from 2011 to 2014 – told CNN Sport.

When the FIFA World Cup Twitter account posted images of the Iranian players smiling and goofing around in a pre-tournament photoshoot, it prompted criticism by some on social media.

“I am so disappointed, so heartbroken by these,” Iranian-born football journalist Sina Saemian tweeted. “The lack of common sense, lack of empathy and insensitivity shown in these pictures is genuinely disheartening. The photo op is absolutely FIFA’s requirement, but the poses are not. There is a clear absence of any sense of awareness.”

Although its star forward, Azmoun, has shown his support for the protestors, Namazi says that many of the other national team players have remained relatively quiet, “leaving a bad taste.”

Azmoun, who plays for the German team Bayer Leverkusen, posted multiple times to social media, and changed his profile picture to black in support of the protesters, and indicated that it could have cost him a place in the World Cup squad.

“That is worth sacrificing for one strand of Iranian women’s hair,” he wrote in an Instagram story. “Shame on you who kill people so easily. Long live Iranian women.”

Azmoun was ultimately selected to play in Qatar, but Iranwire, an opposition news outlet, reported that Iranian men’s football team manager Carlos Queiroz had come under pressure from Iran’s Sports Ministry to leave him out the squad.

Protesting at the World Cup, on the biggest stage of all for football, carries potentially huge risks for the current players in the national team.

“The players are under a lot of pressure by the government. It affects their livelihood, their future, their earnings,” Namazi says.

Nonetheless, players will be free to protest at the World Cup so long as they do not break FIFA rules, their manager Queiroz has said.

“I don’t know if they’ll do anything,” Iranian football fan Payam, who didn’t give his surname for safety reasons, tells CNN Sport.

“We are all hoping they do something…If they don’t, it’s going to be a big egg on their face, to be honest.”

Defender Ehsan Hajsafi became the first member of the national team to speak out at the World Cup in apparent support of anti-government protests at home. “They should know that we are with them. And we support them. And we sympathize with them regarding the conditions,” he told reporters, per Reuters, on Sunday.

CNN has reached out for comment to FIFA regarding its stance on potential player protests but, at the time of publication, had not yet received a response.

Former player Ali Daei, a soccer great in Iran, has publicly supported the protestors, with Daei refusing to attend the World Cup in solidarity with protestors.

Meanwhile, beach soccer player Saeed Piramoon imitated cutting his hair, signaling his support for the protesters, after he scored the winning goal in the final of the Intercontinental Beach Soccer Cup while his team was seen not singing the Iranian national anthem before the match.

Iran’s football authorities vowed that “people who have not followed professional and sports ethics … will be dealt with according to the regulations,” a statement published by Iran’s Football Federation after the beach soccer game said.

“I’ve got goosebumps just telling you the courage that it takes,” Mossavat says. “Their entire team was reported to have been taken away from the airport because they didn’t celebrate.”

A video published on BBC Persian allegedly showed journalists blocked from speaking to the national team when they arrived back at the Imam Khomeini Airport in Tehran. CNN could not verify the video.

The build-up to the World Cup has been dominated by discussions surrounding human rights, from the death of migrant workers and the conditions many have endured in Qatar, to LGBTQ and women’s rights.

Iran faces England in its opening World Cup match. In October the Athletic reported that England didn’t have any plans to “publicly demonstrate its solidarity” with the Iranian protestors. Speaking to CNN, an English Football Association spokesperson said: “We are aware of the protests in Iran, and following the situation. It is obviously worrying, but the best people to comment on it are the Iranian people.”

CNN has also reached out to the Welsh FA and US Soccer, teams also in Iran’s group, but, at the time of publication, had yet to receive a response.

‘Maybe we can show people what’s going on’

In the wake of the protests and the human rights violations happening in Iran, several groups inside and outside the country have called upon FIFA to ban it from the World Cup.

In October, a group of prominent Iranian athletes lobbied FIFA via a law firm, urging it to suspend the Iranian Football Federation (FFIRI) and ban it from participating at the World Cup.

“Iran’s brutality and belligerence towards its own people has reached a tipping point, demanding an unequivocal and firm disassociation from the footballing and sports world,” a press release issued alongside the letter reads.

They were joined in this stance by a human rights group, ‘Open Stadiums,’ which describes itself as “a movement of Iranian women seeking to end discrimination” and allow women to attend football stadiums. “The Iranian FA is not only an accomplice of the crimes of the regime, it is a direct threat to the security of female fans in Iran and wherever our national team plays in the world,” the group wrote in an open letter to FIFA in September.

The Ukrainian Football Association also called on FIFA to “consider excluding” Iran’s national team, citing the “systematic human rights violations” there, and “the possible involvement of Iran in the military aggression of Russia against Ukraine.”

CNN has reached out to FIFA and the FFIRI for comment about calls for Iran to be banned from the Cup but, at the time of publication, had not received a response.

Infantino reminded journalists of FIFA’s role as an organization, saying “we’re not the United Nations. We’re not the world police. We’re not… I don’t know the blue helmets.”

Saman Ghoddos, Iran’s only player to play in the English Premier League, and who has publicly supported the protests, also believes that Iran should compete at the World Cup.

“I’ve heard about it and from my point of view, I don’t know if it’s the right direction,” he told CNN’s Don Riddell in October. “Because I always think that football should be outside politics and should not be involved in that.

“But I don’t think it’s the right move to kick out Iran from the World Cup, but maybe we can put a light and show people what’s going on.”

For Mossavat, the World Cup seems to be operating in an alternate reality to the protests unfolding in his home country.

“While this is happening, I cannot see people being overly excited [about the World Cup] when they’re out on the street fighting for freedom,” Mossavat says. “I think it’s going to be difficult to galvanize people.”

The national team, Queiroz said on Twitter, are seeking to bring “joy, happiness and pride” to the fans in Iran.

“For him to have the audacity to come and say: ‘Oh, our job is to entertain people and make people happy.’ What people are you making happy?” Mossavat says.

“Can Mahsa Amini’s parents, or [the parents] of Navid Afkari…be happy, be joyful to watch you play football? That’s impossible.”

Afkari was a famous Iranian wrestler who was executed by the government in Iran in 2020 for a crime human rights activists, his family and friends say he did not commit.

Football seems of diminished importance in the wake of such grief that Iranians have experienced in the last few months.

“When you know what’s going on, it’s very difficult to prioritize football,” Ghoddos added. “It’s very difficult and football comes in the second hand because it’s lives that are being lost by fighting for freedom.”

When Iran’s football team takes to the field at the World Cup, complete with national anthems, flags and as a tangible manifestation of the country itself, more than progress to the knockout stages is at stake, for it will find itself inadvertently entangled in the fight for Iran’s future.