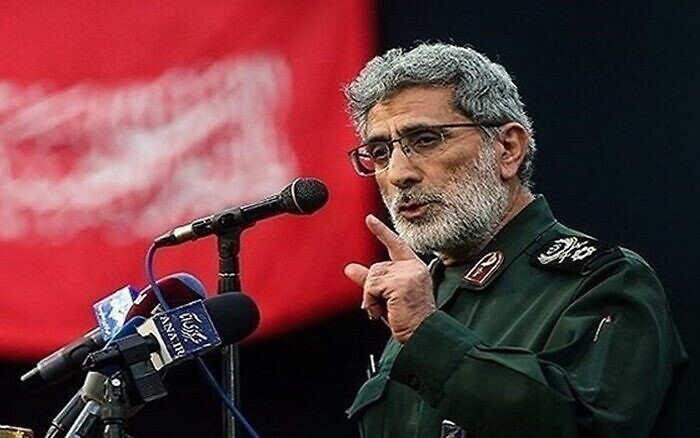 File photo of General Esmail Ghaani the commander of the Qods Force of the Iranian Revolutionary Guard . He was appointed Ghaani as Commander of the Quds Force following the assassination by the US of his successor general Qassem Soleimani
Share:

Iran will continue its struggle until the destruction of “enemies”, the United States and Israel, the commander of the Qods Force of the Iranian Revolutionary Guard said Friday.

As a new flare up of violence between Israel and Iran-backed Islamic Jihad began Friday, Esmail Ghaani (Qaani) was speaking at a memorial service for three servicemen killed in the Syrian war.

Ghaani repeated a recent statement heard from other Iranian officials that Israel is in decline and said that “Hezbollah fighters are making plans to deal the the last blow against the Zionist regime…and to realize the wish of Imam Khomeini to eradicate Israel from the map and the face of the Earth.”

But he also threatened the United States: “The enemies of [Iran’s] Islamic government, led by America and the Zionist regime should know that we will never stop self-sacrifice and will move forward on the path of resistance.”

The Islamic Republic uses the terms “resistance” to refer to its regional foreign and military policy of arming and supporting militant groups, such as the Islamic Jihad, the Lebanese Hezbollah, and the Houthi forces in Yemen primarily for threatening the Arab states that are friendly to the West.

“The honorable path of martyrs will be pursued until the complete destruction of the enemies of the Islamic system,” he said, meaning Iran’s Islamic Republic.