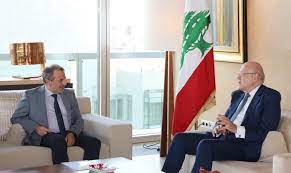 Minutes after the FPM issued a statement slamming Mikati for corruption, Mikati hit back at Bassil without naming him, criticizing him for lecturing about honesty and rightness, while he is internationally sanctioned for corruption.

The U.S. Department of the Treasury’s Office of Foreign Assets Control (OFAC) sanctioned Bassil in November 2020 , pursuant to Executive Order (E.O.) 13818, for his role in corruption in Lebanon.

E.O. 13818, which builds upon and implements the Global Magnitsky Human Rights Accountability Act, targets corruption and serious human rights abuse around the world.

“The systemic corruption in Lebanon’s political system exemplified by Bassil has helped to erode the foundation of an effective government that serves the Lebanese people,” said Treasury Secretary Steven T. Mnuchin. “This designation further demonstrates that the United States supports the Lebanese people in their continued calls for reform and accountability.”

Mikati had claimed that the FPM is seeking to “justify its failure in many files it was in charge of, most importantly the electricity file.”

President Michel Aoun, Mikati and the FPM had been exchanging accusations, after FPM did not name Mikati as a PM designate.

Mikati on the other side presented to Aoun a government line up in which he replaced FPM- backed minister Walid Fayyad with another candidate for his failure to deliver on the electricity file and refusing to update the cabinet on the Egyptian gas and Jordanian electricity project .

The line-up that Mikati presented to Aoun was leaked to the press, and Mikati accused the office of President Aoun of leaking it .

On Wednesday Mikati slammed “the deliberate leaking of the line-up” and “the subsequent interference of the presidential staff and their insults against the premiership’s position and the PM-designate in person.”