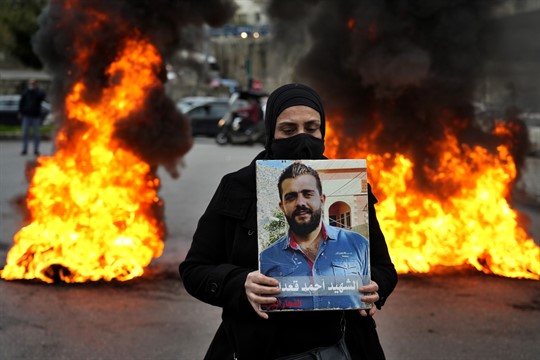 Ilham al-Bikai holds the portrait of her son, Ahmad Kaadan, who was killed in the deadly 2020 Beirut port explosion, during a demonstration in support of judge Tarek Bitar who is investigating the blast, Beirut, Lebanon, Feb. 7, 2022 (AP photo by Bilal Hussein).
Share:

Two weeks ago, I returned to Beirut for my first visit to Lebanon since an economic crash transformed the country into a perverse lab experiment on the limits of human tolerance for completely avoidable privation and abusive governance.

The human impact of the crisis, which began in October 2019, has been thoroughly chronicled, but it’s still stunning to see it in person. Every individual and household in the country runs a daily obstacle course to secure what food, fuel and medicine is available. Meanwhile, the ultra-rich continue to live in style, packing into clubs and luxury shops in full view of Lebanon’s suffering majority. “The biggest miracle is that there isn’t more property crime,” one friend remarked.

The gap between the tiny demographic of the “haves” and everyone else is enraging—especially because there is no inherent reason for the crisis. No shortages or natural disasters or wartime blockades caused Lebanon’s collapse. Rather, the country’s economy has been destroyed by the greed and venality of a ruling cabal of political bosses.

From my hotel room window in West Beirut, I could see the headquarters of the Central Bank. Its smart, new office tower, complete with a “green facade” of lush plants from street-level to roof to keep the building cool, would not be out of place in Frankfurt or Paris. Somewhere inside it, Central Bank chief Riad Salameh­—the man who oversaw all of Lebanon’s state-run Ponzi schemes, as well as the chicanery of the private banking sector—lives in “hiding” to avoid an arrest warrant from the Lebanese judiciary.

“He is the master of secrets,” Nizar Saghieh, head of the reform and accountability group Legal Agenda, told me.

The intersection of public malfeasance and private suffering is overwhelming. Every friend and colleague I met had a tale of woe: life savings now held in worthless Lebanese lira accounts; extended families struggling to survive on once-comfortable public sector salaries that now barely cover household expenses for a day or two; and wave after wave of emigration. My friends spend their days looking for deals on food staples and visiting banks that don’t let them freely withdraw whatever money they still have in them. Then they rush home so as to do household chores in the event the electricity comes on for an hour.

Perhaps this obstacle course that consumes daily life is part of the plan; it certainly saps energy that could otherwise go into political opposition. As Saghieh put it, the system that caused all this suffering “wants to keep people distracted.”

Remarkably, that system has not yielded in the least. Lebanon’s politicians are in the process of choosing a new government that so far looks exactly like the last one and more or less like every government since 1991. At the same time, Lebanese leaders are negotiating a bailout plan with international donors, but don’t want to include any reforms or accountability for the private banks that were most responsible for torpedoing the country’s economy. They’re playing a game of brinkmanship, betting that international donors will ultimately feel more pity for the Lebanese people than the country’s own rulers and blink first on a condition-free bailout.

From 2013 to 2018, I worked, lived and raised my kids in Beirut. Back then, when the situation was still “normal,” even my comparatively luxurious daily lifestyle involved constant, exhausting challenges: competing for limited water-truck deliveries to fill a tank on the roof when the municipal water ran dry; fighting over capricious rate hikes by the operator of the private generator that I—like many in Beirut—used to supplement the intermittent state-run electricity grid; seeking an intercession from someone more powerful and important than me when government officials would slow-roll my children’s residency permits without cause. Even prior to the current crisis, these and other hardships were the lived consequence of the breakdown of the power of the Lebanese state and its ability to provide services.

Every single aspect of life in Lebanon back then reflected the flawed compromise that ended the civil war in 1991 with no accounting for the hundreds of thousands of dead and missing. There were no truth and reconciliation hearings, no war crimes tribunals, nor even an exhumation of the mass graves that still lay unmarked throughout the country, or a public listing of the names of the dead. To this day, there are still at least 17,000 Lebanese unaccountedfor, and the warlords that still run the country have frustrated even the most minimal of symbolic gestures, such as an initiative to erect a memorial to the civil war’s dead. Only one warlord, Samir Geagea, went to prison. But after spending 11 years behind bars, Geagea went on to lead Lebanon’s largest Christian political party and is now a serious contender for the presidency, while political activists who criticize his wartime record face harassment from Lebanese security forces.

At Legal Agenda, Saghieh and his colleagues work around the clock for judicial reform and accountability. He sees a straight line connecting each act of impunity, from the mass graves of the civil war, to the mass corruption that sparked Lebanon’s depression, to the elite negligence that caused the August 2020 Beirut port explosion, which killed 218 and has left the city’s residents traumatized. In none of these cases was anyone held to account. “We can only end impunity by creating a real democratic state in place of this corrupt state,” Saghieh told me.

Plenty of people around the world, even in nearby Middle Eastern countries like Iraq and Yemen, suffer privations equal to or worse than the Lebanese. What makes Lebanon unique, and uniquely distressing, is that the misery is entirely optional. Lebanon is a small, rich country with fewer than 6 million residents and a wealthy, generous diaspora. The technical solutions to its problems are well-known and documented. There’s no mystery about how to provide electricity, clean water, health care and security within the tiny country’s borders.

As dispiriting as the current crisis is, the fact that people still aspire to lives of dignity offers hope. But even as Lebanon’s people strive to raise themselves up from this grim bottom, it’s also clear that the country’s criminal rulers won’t surrender even the smallest perk willingly.

Thanassis Cambanis is a senior fellow and director of the international policy program at The Century Foundation in New York. He teaches at Columbia University’s School of International and Public Affairs. His books include “Once Upon a Revolution: An Egyptian Story,” “A Privilege to Die: Inside Hezbollah’s Legions,” and four edited volumes about politics and security in the Middle East. He is currently writing a book about the Iraq war’s global impact. His Twitter handle is @tcambanis.