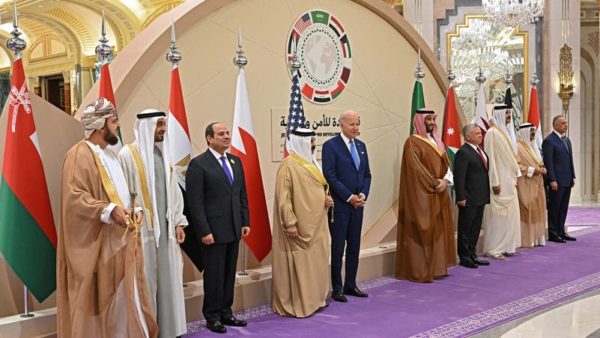 Jeddah summit leaders pose together for a photo. (Reuters
Share:

The summit leaders renewed their call on Iran to fully cooperate with the International Atomic Energy Agency (IAEA) and with the region’s countries to keep the Gulf free of mass destruction weapons and preserve regional and international stability and security. The leaders also said it was important that the Lebanese state imposes its control on all of its territories, adding that for the government to practice its sovereignty in full, the only authority that should be present is that of the state , a possible reference to the fact that the state of Lebanon is currently run by Iran’s proxy Hezbollah

Leaders who participated in the Jeddah Security and Development Summit released a communique stressing their keenness to confront challenges in the region and preserve security in the Middle East.

The summit, hosted by Saudi Arabia, kicked off on Saturday with the participation of all GCC countries plus Egypt, Jordan and Iraq – also known as GCC+3.

US President Joe Biden and other US officials who arrived in the Kingdom on Friday also took part in the regional summit.

In the communique, the leaders renewed their call on Iran to fully cooperate with the International Atomic Energy Agency (IAEA) and with the region’s countries to keep the Gulf free of mass destruction weapons and preserve regional and international stability and security.

“The leaders reiterated their condemnation of terrorism… and reaffirmed their keenness to strengthen efforts to combat terrorism and extremism, prevent the armament and financing of terror groups and confront all activities that threaten the region’s security and stability.”

On energy, the leaders affirmed the importance of the stability of energy markets and praised Saudi Arabia’s leading role in achieving consensus within OPEC+ as well as the latter’s efforts that aim to keep oil markets stable in a manner that serves consumer and producer interests.

GCC leaders also welcomed Biden’s emphasis of the US’ permanent commitment to the security of its partners and the US’ recognition of the region’s central role in connecting the Indo-Pacific with Europe, Africa, and the Americas.

On regional affairs, the leaders affirmed their common vision for a region where peace and prosperity prevail, noting that this requires taking all necessary measures to jointly confront the challenges the region faces and requires adherence to the rules of good neighborliness and respect for sovereignty and territorial integrity.

On the Israeli-Palestinian conflict, Biden reiterated the US’ commitment to work toward achieving a just, comprehensive, and lasting peace in the Middle East.

“[Gulf] leaders stressed the need to reach a just solution to the Israeli-Palestinian conflict on the basis of the two-state solution.”

They also voiced the importance of supporting the Palestinian economy and the United Nations Relief and Works Agency for Palestine Refugees (UNRWA).

During the summit which also discussed climate, the leaders renewed their determination to strengthen regional cooperation and develop joint projects to achieve sustainable development and confront climate change.

They also praised the Saudi Green Initiative and the Middle East Green Initiative, which Saudi Arabia’s Crown Prince Mohammed bin Salman had announced, and said they look forward to climate conferences – such as the UN Climate Change Conference (COP27) – which will be hosted later by Egypt, the UAE and Qatar.

On Iraq, the leaders reaffirmed their support to Iraq’s sovereignty and stability and welcomed Iraq’s positive role toward facilitating communication and building trust among the region’s countries.

Regarding Yemen, the leaders called on all Yemeni parties to immediately engage in direct UN-backed negotiations and voiced hope that a political solution is reached based on the Gulf initiative, Yemen’s National Dialogue Conference and UN resolutions.

The leaders also discussed Syria and said efforts must be intensified to reach a political solution to the crisis in a manner that maintains Syria’s unity and sovereignty and fulfils the Syrian people’s aspirations.

On Lebanon, the leaders said it was important that the Lebanese state imposes its control on all of its territories, adding that for the government to practice its sovereignty in full, the only authority that should be present is that of the state.

Regarding the situation in Libya, the leaders renewed their call for unifying military institutions under UN supervision and voiced the necessity of holding parliamentary and presidential elections.

On Sudan, the leaders reaffirmed their support of efforts aimed at achieving stability and encouraged a consensus among Sudanese parties.

Regarding the war in Ukraine, they urged the international community to intensify its efforts to reach a peaceful solution, end the humanitarian suffering and facilitate the export of grains and food products.

As for the Grand Ethiopian Renaissance Dam, the leaders called for a diplomatic solution that achieves the interests of all involved parties and contributes to prosperity of the region.

On Afghanistan, the leaders noted that efforts must continue to provide humanitarian aid to Afghanistan and deal with the threat of terrorists in the country and thanked Qatar for supporting the security and stability of the Afghan people.