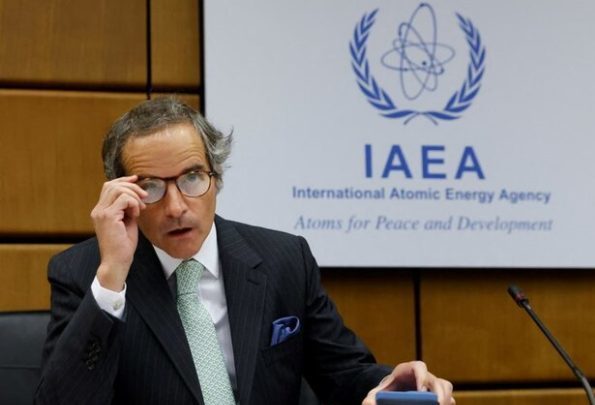 File photo– Rafael Gross, the director of the International Energy Atomic Agency (IAEA) said last June that Iran will remove 27 surveillance cameras at different nuclear sites. EU Diplomats have said Iran’s response to the EU coordinator was a step backwards, with it seeking to link a revival of the deal with the closure of investigations by the International Atomic Energy Agency (IAEA) into the uranium traces.
Share:

“Tenuous at best,” is how Iran envoy Robert Malley described to the Senate the prospects for resuming stalemated talks with Iran. Yet, against all evidence to the contrary, the Biden administration clings forlornly to the hope of a new nuclear deal. It is beyond time to move on.

The administration’s intent to rejoin the 2015 Joint Comprehensive Plan of Action nuclear deal, and use this to pursue a “longer, stronger” follow-on accord, would produce, at this juncture, only a shorter and weaker agreement and give Tehran a financial windfall.

With its policy in tatters, the White House must promptly and publicly not only heed Sen. Robert Menendez’s (D-N.J.) explicit calls for it to provide a “Plan B” but actually adopt it as well. This should start with acknowledging that Tehran has killed any effort at serious diplomacy. Then, the administration must act on Malley’s assertion that “we are fully prepared to live with and confront the reality” of no deal, as a new report from the Jewish Institute for National Security of America (JINSA) lays out.

Avoiding “a nuclear crisis in the Persian Gulf” was Malley’s justification for indefinite negotiations. But staying on this course will produce precisely the outcomes the United States wants to avoid. Already perched on the brink of the bomb (as a recent International Atomic Energy Agency report notes), and with Russia’s recent nuclear threats deterring direct U.S. intervention in Ukraine, Iran now has more incentive than ever to keep approaching the nuclear threshold while American diplomats bury their heads in the sand.

Simultaneously, the administration’s inaction in the Middle East and underenforcement of U.S. sanctions, rather than earning Tehran’s goodwill, simply provide Iran with more money and opportunities to destabilize the region, attack U.S. interests and raise the risks of a major conflict.

Left on autopilot, this approach increases the pressure the United States and its partners will have to apply to get concessions from Tehran, while shrinking their window to do so. Years of declining U.S. commitments in the Middle East make matters worse, as America’s partners and Tehran harbor serious doubts about Washington’s willingness to stop Iran’s nuclear and regional aggression.

Plan B’s immediate goal must be to counter these malign activities. The administration should make abundantly clear the United States is recommitting its attention and presence to the Middle East through a Biden Doctrine affirming its readiness to use all elements of national power, including military force, to defend vital U.S. interests in the region, including preventing nuclear proliferation. This also requires reversing the administration’s tendency, echoed in Malley’s testimony, of downplaying U.S. military options for preventing a nuclear Iran.

Though the credibility of a Biden Doctrine needs to be bolstered by updated U.S. contingency planning, joint exercises and enhanced force posture, America also must boost the military capabilities of its willing Middle Eastern partners on the frontlines and work to integrate their efforts more coherently into a regional defense network.

Foremost, this means supporting Israel’s freedom of action, which has borne the heaviest burdens of holding the line against Tehran. The United States should swiftly transfer key weaponry for which Israel already is arranging procurement, including KC-46A refueling tankers, additional F-35 aircraft, precision-guided munitions, and missile defenses.

A potential Middle East summit next month, when the president visits Israel, offers the perfect opportunity to formally announce this strengthened U.S. approach that bears his name and to mend diplomatic fences with Riyadh and Abu Dhabi. Both of these vital partners have been deeply alarmed by the persistence of Plan A and have begun hedging toward some combination of China, Russia and Iran.

The administration also must enforce sanctions. Stringent penalties on violators of U.S. prohibitions against Iran’s oil exports — for instance, China — would choke off key revenue streams for the Iranian regime. Working with its European allies, the Biden team also should move to censure Tehran for its systematic stonewalling of international atomic inspectors and pursue “snapback” of legally binding United Nations sanctions in response to Iran moving to the brink of nuclear weapons capability.

The White House has said consistently it will move to Plan B if diplomacy fails to secure a JCPOA return. Iran has made clear that will not happen on anything remotely like acceptable terms; the United States must move on as well.

Ambassador Eric Edelman is a former U.S. undersecretary of Defense for Policy. Gen. Charles Wald, USAF (ret.), served as the deputy commander of U.S. European Command. They co-chair the Iran Policy Project at the Jewish Institute for National Security of America (JINSA).