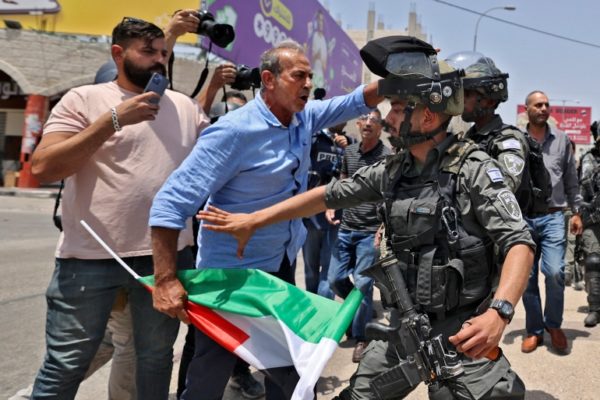 A confrontation between a man holding a Palestinian flag and Israeli border guards in the occupied West Bank town of Hauwara, on May 27, 2022 [Jaafar Ashtiyeh/AFP]
Share:

Israeli forces shot a Palestinian teenager dead near Bethlehem in the occupied West Bank and in a separate incident Israeli forces injured around 90 people protesting near Nablus against the confiscation of Palestinian flags by Jewish settlers.

At least one Palestinian was shot in the leg and dozens of other protesters sustained injuries from stun grenades, rubber-coated bullets and tear gas inhalation during clashes in the West Bank town of Huwara, near the city of Nablus, the Palestine Red Crescent Society said on Friday.

“What is happening in Huwara is a provocation by the settlers,” Mohammad Abdelhameed, a Huwara council member, told Reuters.

“We hang the Palestinian flag, which is a symbol of our identity and it will remain raised as long as we are on this land,” he said.

Condemning the Israeli forces’ violence as “repression”, the Palestinian Foreign Ministry said in a statement that locals were protesting against expanding Jewish settlements and the confiscation of Palestinian land.

The Israeli military did not immediately respond to a request for comment.

Separately, Israeli forces shot a Palestinian teenager dead in the town of al-Khader near Bethlehem, the Palestinian health ministry said.

The victim was the second Palestinian teenager killed this week.

The 15-year-old, identified by Palestinian media as Zayd Mohamed Saeed Ghoneim, was shot in his neck and back, the ministry said in a statement.

The killing “is part of a series of crimes and field executions carried out by the occupation forces”, the ministry added.

The Israeli military said it responded with live bullets when a number of suspects hurled rocks and petrol bombs at soldiers in the area, adding that the incident was under review.

It was not clear whether the slain teenager was involved in the stone-throwing.

The killing and injury of Palestinians on Friday comes in advance of a planned “flag” march by Israeli nationalists in occupied East Jerusalem’s Old City on Sunday.

The controversial march, which is scheduled to pass through the Muslim quarter of the city, is staged annually in celebration of Israel’s capture of the Old City in the 1967 Middle East war.

For many Palestinians, the march is a blatant provocation and a gross violation of one of the few places in the city, increasingly hemmed in by Jewish development and settlement, that retains a strong Palestinian identity. Legal efforts to ban the march have failed.

Prime Minister Naftali Bennett has defended a decision by his security officials to let Sunday’s procession enter the city’s Damascus Gate and pass through the Muslim quarter. Some members of his coalition have urged him to rethink the route and suggested there might be a last-minute change of heart.

Hamas, the Palestinian resistance movement that governs the Gaza Strip, has said they are ready for confrontation if the Israeli government does not keep the march out of Muslim neighbourhoods on Sunday.

“They can avoid a war and escalation if they stop this mad [march],” Bassem Naim, a senior Hamas official, told Reuters in Gaza this week.