Russian military has lost over 10% of combat force sent to Ukraine. Resistance seeking to retake ground from Russians 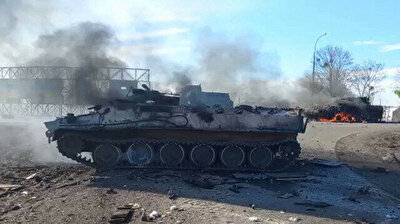 A Russian tanks was spotted destroyed by the Ukrainian forces in Kharkiv , March 22, 2022
Share:

The Russian military has lost more than 10% of the combat force that President Vladimir Putin sent to invade Ukraine, a senior Pentagon official said Tuesday.

The Russian combat force has dipped slightly below 90% for the first time in a war that began less than a month ago, said the official, who spoke on condition of anonymity to describe intelligence assessments. Not all of the more than 150,000 Russian troops in and around Ukraine are combat troops; many provide support functions.

Russian ground forces remain largely stalled across Ukraine, particularly around the capital of Kyiv, where their closest troops remain about 10 miles from the city’s center.

The official described Ukrainian resistance as quick and nimble – and for the first time in the war seeking to retake ground from the Russians.

In Mariupol, the besieged port city in southern Ukraine, Russian ships have been shelling from the sea for the first time, the official said. The shelling appears to be a sign that Russia continues to struggle on the ground against Ukrainian forces. Russian commanders instead are relying on long-range bombardment to take the cities, a tactic that often results in civilian casualties.

Russia continues to have problems supplying its troops in Ukraine with food, fuel and weaponry, the official said. Some soldiers have suffered frostbite because they don’t have proper cold-weather gear. There are signs Russia is having trouble keeping ships fueled at sea, the official said.

Meanwhile, the Ukrainian army said it forced Russian troops out of Makariv, a strategically important Kyiv suburb, after a fierce battle. The regained territory allowed Ukrainian forces to retake control of a key highway to the west and block Russian troops from surrounding Kyiv from the northwest.

But Ukraine’s Defense Ministry said Russian forces battling toward Kyiv were able to partially take other northwest suburbs – Bucha, Hostomel and Irpin – some of which had been under attack almost since Russia’s military invaded late last month.

The president of Poland compared Russia’s attacks on Ukraine to Nazi forces during World War II. President Andrzej Duda said besieged Mariupol looks like Warsaw in 1944 after the Germans bombed homes and killed civilians “with no mercy at all.”

A laboratory at the Chernobyl nuclear plant that works to improve the management of radioactive waste was destroyed, according to the Ukrainian agency in charge of the area surrounding the plant on Tuesday.

The laboratory contained “highly active samples and samples of radionuclides that are now in the hands of the enemy, which we hope will harm itself and not the civilized world,” the agency said in its statement.

Russia seized control of Chernobyl early on in its invasion of Ukraine, along with the Zaporizhzhia plant. Chernobyl is the site of the world’s worst nuclear disaster in 1986 when a reactor exploded. The exclusion zone is the contaminated area around the plant.

Russian President Vladimir Putin has not ruled out the possibility of using nuclear weapons in the nearly four-week-long war with Ukraine, his longtime spokesman said Tuesday in a CNN interview