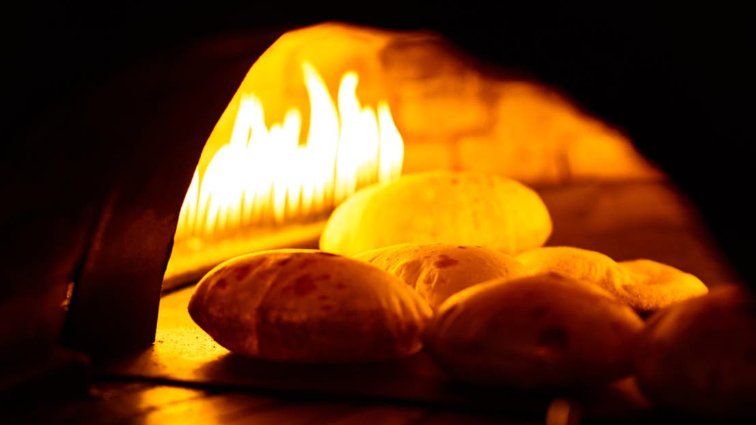 Lebanese Pita bread. Lebanon imports 60 % of its needs from Ukraine . The Lebanese Silo was destroyed in the Beirut Port blast and all the wheat is now stored at the flour mills , Several countries in the Middle East will be badly affected because of their inability to import wheat from Ukraine and Russia because of the war . Lebanon is close to reaching an agreement with the World Bank in which the international agency would give the crisis-hit country a $150 million loan for food security and to stabilize bread prices for the next six months,
Share:

The PM’s request came during a meeting with Mohammed at the Grand Serail in the presence of UN Resident and Humanitarian Coordinator for Lebanon Najat Rochdi and Under-Secretary-General of the United Nations and Executive Secretary of ESCWA Rola Dashti.

“Mikati asked Mohammed for supporting Lebanon on food security in the face of the multiple challenges resulting from the presence of huge numbers of displaced Syrians in the country,” read a statement from the PM’s office.

During the meeting, Mikati also requested assistance in the recovery of funds transferred abroad and the fight against corruption.

The PM’s demand to support Lebanon comes as a food security crisis looms in the horizon feel of the Russian war on Ukraine and the difficulty in importing goods, especially wheat.

Several officials have warned that Lebanon has wheat reserves sufficient to cover only one month.

Lebanon imports 60% of its wheat from Ukraine .

Sanctioned Russian fertilizer and coal tycoon, Andrey Melnichenko, has warned that the Russian invasion of Ukraine will lead to a world food crisis and called for the war to end.

“The events in Ukraine are truly tragic. We urgently need peace. As Russian by nationality, Belarusian by birth, and Ukrainian by blood, I feel great pain and disbelief witnessing the brotherly peoples are fighting and dying,” Melnichenko said in comments sent by his spokesperson to Insider.

“One of the victims of this crisis will be agriculture and food,” Melnichenko also said, adding that the war has “already led to soaring prices in fertilisers which are no longer affordable to farmers.”