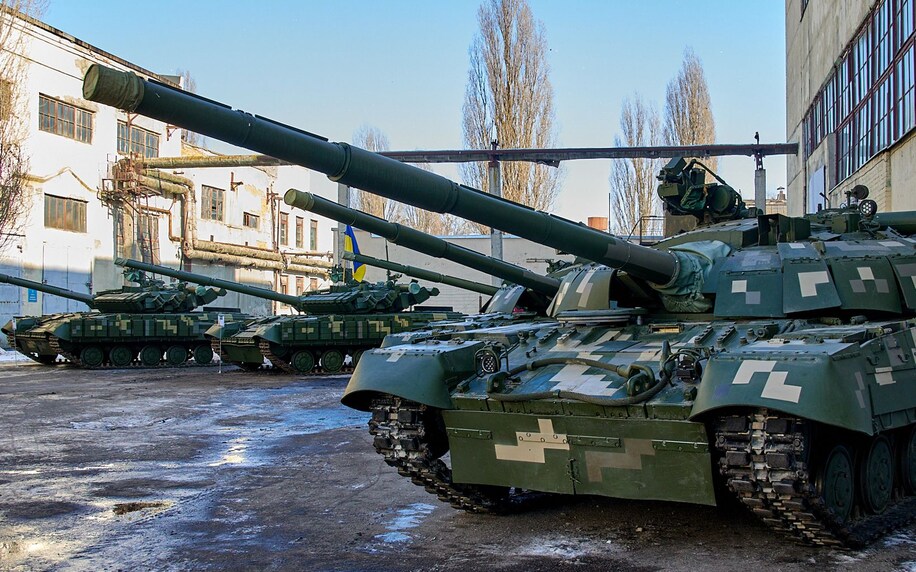 Ukrainian tanks are seen in the eastern Ukrainian city of Kharkiv on Feb. 15. (Sergey Kozlov/EPA-EFE/REX/Shutterstock)
Share:

Russian President Vladimir Putin said on Tuesday that he decided “to partially pull back troops” stationed on Ukraine’s borders. This does not mean the threat of war is gone. NATO Secretary General Jens Stoltenberg stressed that “we have not seen any sign of de-escalation on the ground.”

Still, there is cause for optimism. Russian Foreign Minister Sergei Lavrov declared on Monday that diplomatic efforts were “far from exhausted.” The decision to de-escalate is Putin’s alone, although the search among Russian officials for rationalizations for ending their military “exercises” suggests that President Biden’s efforts to stand up to the Russian bully might be bearing fruit.

In the meantime, right-wing calls to appease Putin seem to have been thoroughly demolished. The apologists for defeated former president Donald Trump — the same who said Trump’s superior foreign policy prowess justified his reelection — are left grasping for criticisms of Biden, whose devotion to democratic allies and determination to confront illiberal regimes are far closer to Ronald Reagan’s Cold War outlook than Trump’s Neville Chamberlain-style contempt for beleaguered Eastern European countries.

It should be no surprise that MAGA cultists have been soft on Russia. Trump spent much of his presidency conducting a propaganda campaign on behalf of Putin. “I think our country does plenty of killing also,” he said in response to a question about Putin’s alleged killing of Russian journalists.

As president, Trump sided with Putin over the U.S. intelligence community regarding interference in the 2016 campaign, lobbied for Russia’s return to the G-7, echoed Putin’s talking points that Crimea was part of Russia and tried to extort Ukraine to help his reelection. Republicans in Congress and right-wing pundits insisted his “America First” policy (concede spheres of influence to Russia, recede from international organizations, hang democratic allies out to dry) was brilliant statecraft.

Since Biden has been in office — and while he was organizing a resolute Western alliance in defense of NATO’s “open door” policy and Ukraine’s territorial integrity — some Republicans have been ready to throw Ukraine to the wolves (or at least permanently deny it entry into NATO). Others have grumbled that Biden was too “slow” to respond to the crisis (recall that the buildup of Russian forces did not begin until November)or insisted our withdrawal from Afghanistan encouraged Russian aggression (as opposed to four years of Trump appeasement).

The GOP would be wise to heed the lessons of the Ukraine conflict regardless of whether Putin blinks or not. For starters, the right’s disdain for international institutions and the notion that allies are burdens, not assets, have once more proved dangerously uninformed. An enhanced NATO and the new alliance with Britain and Australia to fend off China show how democratic allies are essential to preserving our own economic and national security interests.

Second, ceding to Russia’s demand that Western leaders swear off Ukraine’s admission to NATO, as some in the GOP called for, would have been disastrous. Once Putin achieved that objective, nothing would have deterred him from grabbing Ukraine anyway, menacing other neighbors and foreclosing NATO membership for countries such as Sweden. The Republican Party, which once cut its teeth in the Cold War and lionized Winston Churchill (the foe of appeasing dictators), now flails away without a guiding principle beyond opposing Biden and expressing fealty to Trump.

Third, it is not coincidental that Republicans who are most determined to hold Trump accountable for the 2020 coup attempt, such as Rep. Liz Cheney (R-Wyo.), are among the strongest hawks on Russian aggression. The fate of our democracy is inextricably linked to the fate of other democracies, which pose a threat to illiberal regimes. It is not extending NATO membership to Ukraine that threatens Putin’s iron grip on power; it is Ukraine’s turn toward the democratic West. And it is the dissolution of U.S. democracy at the hands of anti-democratic Republicans that gives Putin and his ilk encouragement that they are on the winning side of history.

Let’s hope Putin finds his off-ramp to war. Then we can evaluate what it means to have America “back.”