Lebanon must not be platform for hostility, Kuwaiti FM says, update 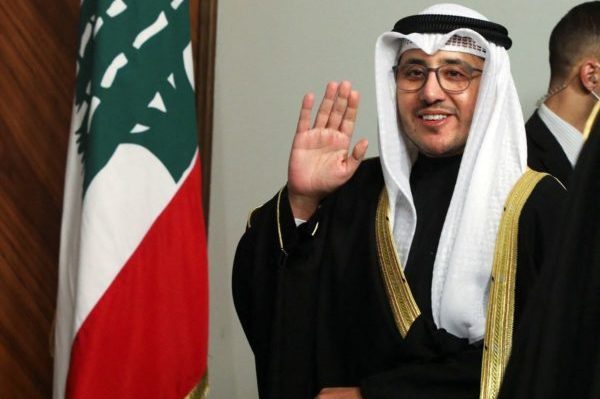 Prosecutors in Kuwait detained 18 people last November suspected of financing Lebanon’s Iran-backed Hezbollah militant group , a proxy of Iran that has been actively interfering in the internal affairs of the Arabian Gulf countries . The aim of Kuwait’s foreign minister visit is to tell Lebanon, leave us alone.

BEIRUT -Kuwait’s foreign minister said on Sunday Lebanon must not be a platform for hostile acts or words toward Gulf Arab states, an indirect call for curbs on the Iran-backed group Hezbollah in order to improve strained ties.

Sheikh Ahmad said on Saturday he had delivered confidence-building proposals to Prime Minister Najib Mikati, and that his trip was coordinated with Gulf states.

“We asked that Lebanon not be a platform for any aggression – verbal or actual,” Sheikh Ahmad said after meeting Aoun. “I presented ideas and thoughts … And we are awaiting a response,” he added.

Diplomatic sources told Reuters that among the 12-point proposals was that Lebanon commits to the 1989 Taif Agreement that ended Lebanon’s civil war, tightens border controls to prevent drug smuggling to the Gulf and steps up security cooperation.

The Gulf initiative expressed hope that Beirut will respond by end of the month during a meeting of Arab foreign ministers in Kuwait.

Lebanon’s ties have long been strained by the influence of the heavily armed Shi’ite group Hezbollah, and were plunged into a new crisis in October by comments from a former Lebanese minister criticizing Saudi-led forces fighting the Iran-aligned Houthi movement in Yemen.

Kuwait was one of several members of the Gulf Cooperation Council (GCC), including Saudi Arabia, that responded to George Kordahi’s remarks by expelling the Lebanese ambassador and recalling its envoy to Beirut.

Aoun, a political ally of Hezbollah, said in a tweet on Sunday Lebanon was keen on maintaining “the best relations” with the Gulf Arab states and that the Kuwaiti proposals would be discussed before an appropriate position was announced.

The leaders of Hezbollah, the country’s most powerful armed group with ministers affiliated to it in the cabinet, regularly attack Arab Gulf states’ policies in the region and accuse its leaders of serving Washington’s interests.

Gulf states accuse Hezbollah of lending military support to the Houthis in Yemen.

“Al-Akhbar” newspaper which is closely linked to Hezbollah published the text of Kuwaiti proposal to mend ties with the Arabian Gulf countries.

“In order to heal the rift in Gulf – Lebanese relations, we need to build bridges of trust with the sisterly Lebanese Republic, and in accordance with the data resulting from the recent crisis, which requires taking firm measures and steps to remove any dispute, represented in the following:
1- Lebanon’s commitment to all the requirements of the Taif accord.
2- Lebanon’s commitment to all resolutions of international legitimacy and the resolutions of the League of Arab States.
3- Emphasis on the civility of the Lebanese state in accordance with what was stated in the Lebanese constitution.
4- The policy of disassociation from oneself should be in word and deed.

5- Establishing a specific time frame for the implementation of Security Council Resolutions No. 1559 (2004) regarding the disarmament of militias in Lebanon, Resolution No. 1680 (2006) regarding support for Lebanon’s political sovereignty and independence and full support for the Lebanese National Dialogue, and Resolution 1701 (2006) on Hezbollah’s weapons and the region Southern Lebanon, according to the basic principle of state control over the presence of arms outside the authority of the Lebanese government.
6- Stop Hezbollah’s interference in Gulf affairs in particular and Arab affairs in general, and pledge to pursue any Lebanese party that engages in hostile acts against the GCC countries.
7- To stop all activities of groups opposed to the GCC countries and to prosecute anyone who tries to incite or participate in violence, whether citizens or residents in Lebanon, against the governments of the Gulf Cooperation Council.
8- Commitment to holding parliamentary elections in May 2022, and then presidential elections in October 2022, according to the scheduled dates without change.
9- Auditing the Lebanese exports to the GCC countries through the mechanism of the presence of bilateral observers to ensure that the exports are free of any contraband, especially drugs that target the social security of the GCC countries. In this regard, the same European mechanism can be adopted.
10- Extension of the Lebanese official authorities’ control over all state outlets.
11- Establishing a security information exchange system between the GCC countries and the Lebanese government.
12- Working with the World Bank to find solutions to the issue of Lebanese citizens not being able to receive their deposits in Lebanese banks.