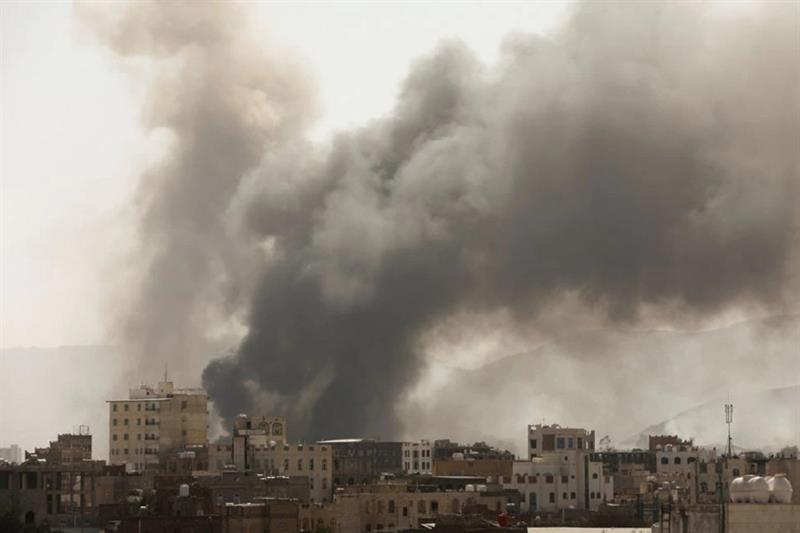 Smoke billows from the site of Saudi-led airstrikes in Sanaa, Yemen REUTERS
Share:

The Saudi-led coalition fighting Yemen’s Houthi insurgents said Monday it had launched air strikes targeting the rebel-held capital Sanaa following a deadly attack against Abu Dhabi that killed three and was claimed by the rebels.

“In response to the threat and (out of) military necessity, air strikes have begun in Sanaa,” the official Saudi Press Agency said on Twitter, few hours after hours after the United Arab Emirates (UAE) vowed reprisals.

The Houthis‘ Al-Masirah TV channel confirmed the raids by the coalition, without immediately reporting any casualties.

The UAE is part of a Saudi-led military coalition that supports Yemen‘s government against the Iran-backed Houthi rebels, who have repeatedly targeted Saudi Arabia with cross border strikes.

But Monday’s attack by the Houthis was the first deadly assault on Emirati soil acknowledged by the UAE and claimed by the rebels, who said they had fired ballistic missiles and deployed armed drones.

Two Indians and a Pakistani working for oil giant ADNOC died as three petrol tanks exploded near a storage facility, while a fire also ignited in a construction area at Abu Dhabi airport in the heart of the UAE, a renowned safe haven in the volatile Middle East.

Police said “small flying objects, possibly belonging to drones” were found at both sites. Drone attacks have been a hallmark of the rebels’ assaults on neighbouring Saudi Arabia.

“We condemn the Houthi terrorist militia’s targeting of civilian areas and facilities on UAE soil today… this sinful targeting will not go unpunished,” UAE Foreign Minister Abdullah bin Zayed Al-Nahyan said in a statement, as his ministry described the attack as a “heinous criminal escalation”.

Houthi military spokesman Yahya Saree said that they had “carried out… a successful military operation” against “important and sensitive Emirati sites and installations” using both ballistic missiles and drones.

The incident follows a surge in fighting in Yemen including advances by UAE-trained troops. The rebels also seized a UAE-flagged ship and its international crew earlier this month.

Other countries, such as the US, Russia and France, as well as the UN have also condemned the attack on Emirati soil.

The rebels have previously threatened to target Abu Dhabi and Dubai, the gleaming crown jewels of the UAE which last year opened its first nuclear power plant.

Abdul Ilah Hajar, adviser to the president of the Houthis’ Supreme Political Council in Sanaa, said it was a warning shot from the rebels.

“We sent them a clear warning message by hitting places that are not of great strategic importance,” he told AFP.

“But it is a warning if the UAE continues its hostility to Yemen, it will not be able in the future to withstand the coming strikes.”

The incident comes two weeks after the rebels hijacked the UAE-flagged Rwabee, and released footage purporting to show military equipment on board.

The UAE said the Rwabee, whose 11 crew are now hostages, was a “civilian cargo vessel” and called the hijacking a “dangerous escalation” in the busy Red Sea shipping route.

The rebels later rejected a UN Security Council demand for the ship’s immediate release, saying it was “not carrying… toys for children but weapons for extremists”.

Yemen’s conflict has been a catastrophe for millions of its citizens who have fled their homes, with many on the brink of famine, in what the UN calls the world’s worst humanitarian crisis.

The UAE joined the coalition against the Houthis before announcing a change of tack in 2019.

The pro-government Giants Brigade troops, backed by the Saudis and UAE, recently delivered a significant blow to the rebels by recapturing three districts in Shabwa governorate.

The clashes were part of an upswing in violence in the shattered country, where the war is being fought on several fronts.