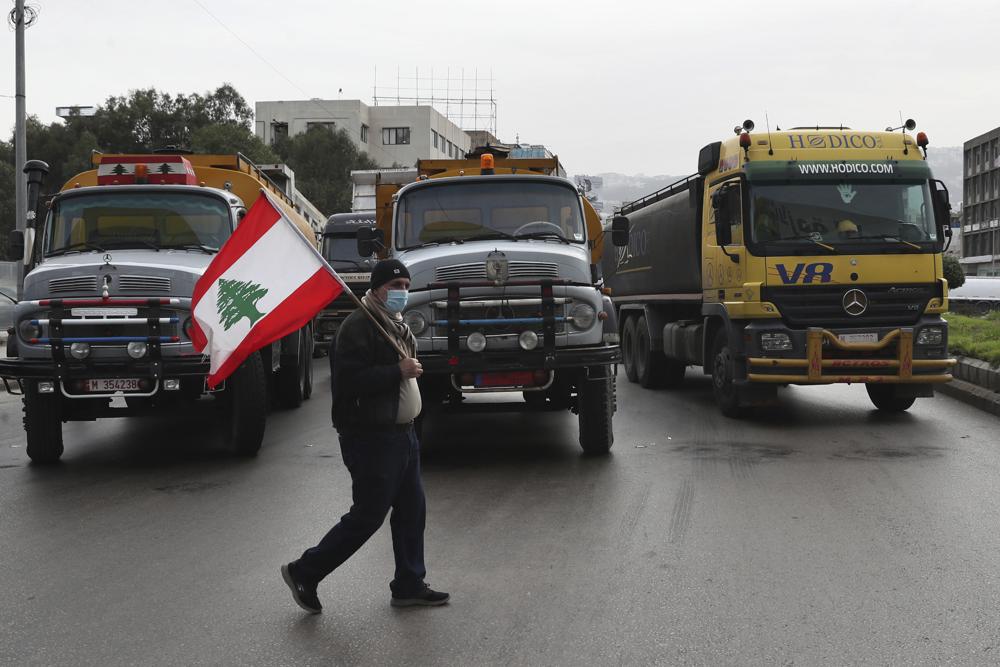 A truck driver holds a Lebanese flag as others drivers block a main highway with their vehicles during a general strike by public transport and workers unions paralyzed Lebanon in protest to the country’s deteriorating economic and financial conditions, in Beirut, Lebanon, Thursday, Jan. 13, 2022. (AP Photo/Bilal Hussein)
Share:

BEIRUT (AP) — Schools, universities and many shops were closed in Lebanon on Thursday as a general strike by public transportation and labor unions paralyzed the crisis-hit Mideast nation.

Protesters closed the country’s major highways as well as roads inside cities and towns, starting at 5 a.m., to protest fuel prices that have increased at an alarming rate after the government lifted subsidies. Taxi and truck drivers used their vehicles to block roads. In the capital of Beirut, many roads were blocked by giant trash bins and vehicles.

The nationwide protests, dubbed a “day of rage,” were scheduled to last 12 hours

The protest action comes as the Lebanese pound has continued to tumble against the dollar. About 80% of people in Lebanon live in poverty after the Lebanese pound lost more than 95% of its value in the past two years. Filling up a gasoline tank now costs more than the monthly minimum wage.

The ruling class, which has run Lebanon into the ground, has proved unwilling to reform and has done almost nothing to try to pull the country out of its meltdown, rooted in decades of corruption and mismanagement.

“The clear indifference of Lebanese policymakers to the suffering of the population amid one of the worst economic crises in modern times borders on the criminal,” said Aya Majzoub, Lebanon researcher at Human Rights Watch.

In its World Report 2022 released Thursday, HRW said that the “corrupt and incompetent Lebanese authorities have deliberately plunged the country into one of the worst economic crises in modern times, demonstrating a disregard for the rights of the population.”

Majzoub called for the international community to use “every tool at its disposal to pressure Lebanese policymakers to put in place the reforms necessary to pull Lebanon out of this crisis.”